Weaving a Tale of Strange Weather 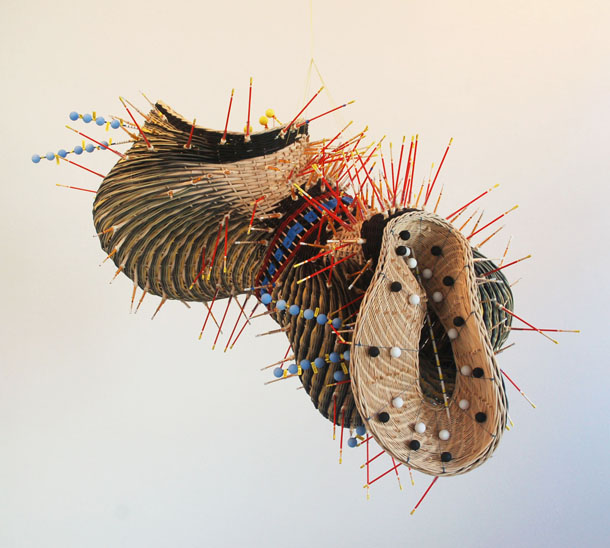 Basket-weaving and astronomy may seem like an unlikely pairing, but artist Nathalie Miebach's work is evidence that the duo makes perfect sense. Twelve years ago, Miebach was taking astronomy classes at Harvard and studying basket-weaving with a local artist at the same time. As she struggled with abstract concepts of deep space and time, she hit upon the idea of using basket-weaving as a three-dimensional grid for astronomical data in order to give it a more comprehensible physicality. She elaborates:

"Basket-weaving is my main sculptural medium through which I translate the data into sculpture because it provides me with a simple yet effective 3D grid through which to translate data. The sculpture becomes collaboration between the material, the numbers, and myself. The material I use to translate is reed, which has an inherent tension that does not allow me to completely control it. If I push it too hard, it will simply break. My lack of control ensures that the numbers have as much of a say in creating the form as I do. It is the changing nature of the numbers over time as well as the inherent tension of the reed that create the shape of the sculpture. Only in certain instances do I step in and exert pressure when I sense the piece falling physically apart. I never know what the shape will be beforehand, which often leaves me scratching my head---some shapes are easier to work with than others."

A residency at the Fine Arts Work Center in Provincetown in Cape Cod, MA, inspired her to bring weather and climate change data into her work. In order to understand the complexity of climate, she has gone so far as creating her own weather station and collecting her own weather data-- much of it collected at the Herring Cove Beach in Cape Cod. By assigning colors and shapes to variables like temperature and wind strength and providing an explanatory legend, Miebach allows her viewer to decipher the sculptures. In the work shown here, each pair of vertical spokes is assigned an hour of the day--the green round reed is twilight data, the yellow flat reed is sun data, the red and orange sticks are high and low tide readings, the blue balls are the number of whales sighted at the particular day and hour, and so on. Miebach's work is on permanent display at the Massachusetts College of Art New Residency Hall in Boston. Upcoming shows include one at Museum of Science, Boston, MA that highlights collaborative projects with Jon Finke of MIT and sound artist Marc McNulty, and a solo exhibit at the California Museum of Arts and Craft, Los Angeles, CA in the fall of 2013.

"This piece looks at the relationship between moon and sun rise and set, data, tidal and twilight readings taken in Provincetown, MA, and whale sightings along the New England Coast during the time frame of February-March 2006. All of the data comes from the U.S. Naval Observatory, NOAA (National Oceanic & Atmospheric Administration), and the Northeast Fishery Science Center."