We May Have Put the Wrong Whales on Our Albums 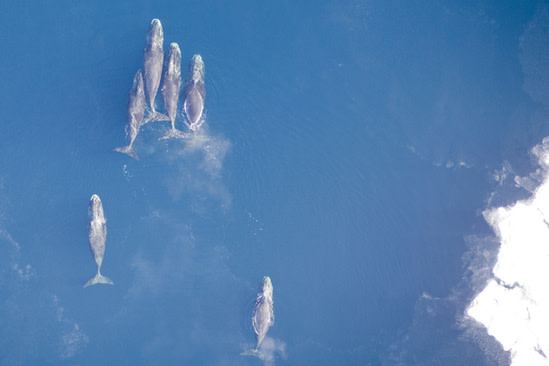 Songs of the Humpback Whale was a 1970 album consisting of about 35 minutes of mellow blooping. It was extremely popular. But as a vocal star, the humpback may have unfairly overshadowed another whale—the bowhead. Recordings high in the Arctic have revealed that these animals have a far more extensive repertoire than the humpbacks do. Researchers lowered microphones into the Fram Strait, a chilly strip of sea east of Greenland, for three years between 2010 and 2014. On the recordings, they captured the singing of bowhead whales 24 hours a day, throughout most of each winter. Scientists have done less research into the songs of these whales than those of their humpback cousins. Among humpback whales, the males are the singers. (That's presumed to be the case in bowheads too. Male whales may sing to attract mates, among other reasons.) And all the males in a population of humpbacks share pretty much the same song, which they sing all season long. But in the bowhead concert happening in the Arctic, the researchers heard something very different. The whales were singing many, many different songs at once. Across three years of recordings, the researchers counted 184 songs. "Most song types were short-lived—from hours to days—and seldom lasted longer than a month," the authors write. New songs arose and disappeared quickly, like internet memes. "Every year a few song types persisted throughout the winter," though, the scientists say. They don't know why bowheads are so virtuosic. Vocal ability is often considered to be an evolutionary trade-off with the size of an animal's testes, the authors write. For example, humpbacks have small testes (for a whale, anyway). But bowheads are well endowed in both areas. You can listen to some of the bowhead whale's many songs below. But don't throw out your humpback CDs just yet. The songs of the bowhead, while numerous, are not especially soothing. https://soundcloud.com/uwnews/fram2013-28 https://soundcloud.com/uwnews/fram2013-2

Image: A pod of bowhead whales in the Arctic, by NOAA Alaska Fisheries Science Center/Amelia Brower.