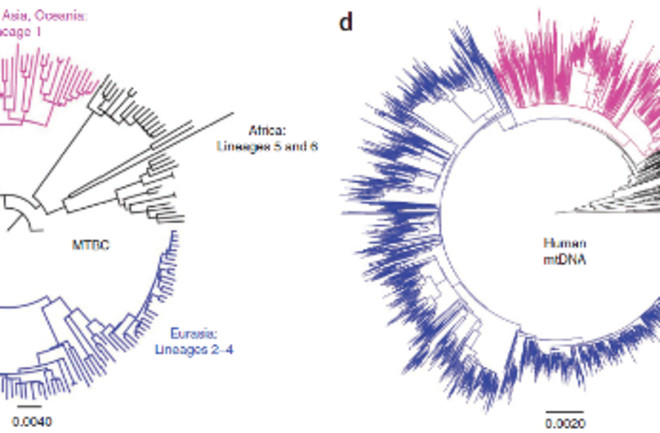 Citation: Comas, Iñaki, et al. "Out-of-Africa migration and Neolithic coexpansion of Mycobacterium tuberculosis with modern humans." Nature Genetics (2013). The two phylogenies above represent Mycobacterium tuberculosis, to the left, and human mitochondrial DNA (passed from mother to daughter) on the right. It was pulled from the paper, Out-of-Africa migration and Neolithic coexpansion of Mycobacterium tuberculosis with modern humans, which just came out recently, and has naturally been making a splash. As the title implies the paper concludes that humans and tuberculosis have been each other's "partners," after a fashion, for the whole existence of modern humanity. The main method here is somewhat brute force and straightforward, by sequencing 259 tuberculosis strains from all across the world they managed to make relatively robust phylogeographic inferences. Throwing data at a question usually resolves something. The correspondence between human and pathogen strains is qualitatively uncanny, and there is plenty enough statistical footwork to confirm it more rigorously within the body of the text.

Citation: Comas, Iñaki, et al. “Out-of-Africa migration and Neolithic coexpansion of Mycobacterium tuberculosis with modern humans.” Nature Genetics (2013). Rather, what's more interesting is the correlation in population growth of tuberculosis and humans as in the Bayesian skyline plots to the left (additionally, coalescence times for the pathogens seem to imply diversification at the same time as anatomically modern humans). This isn't surprising at all obviously; more humans means more hosts. Rather, what's a touch novel is the confirmation that tuberculosis is a Paleolithic disease. There are many illnesses which seem to be endemic to dense agricultural societies. They need the density which agrarian culture provides to incubate and propagate (not to mention the catalytic effect of coexistence with domestic animals). In contrast, pathogens which have deeper roots with our species can perpetuate themselves at the low population densities characteristic of hunter-gatherers via long incubation and low virulence.

It can incubate and remain latent, biding its time until it gets nasty. I am of a mind to reflect how the "two-step" evolutionary genomic relationship of tuberculosis to humans may resemble that of dogs, who seem to have undergone some sort of domestication with hunter-gatherers, before changing again during the Neolithic. These sorts of results force me to reconsider the old maxim, "maybe it's agriculture?" (paraphrasing L. L. Cavalli-Sforza). Perhaps agriculture accelerated many basic elements of human existence, rather than originating them.