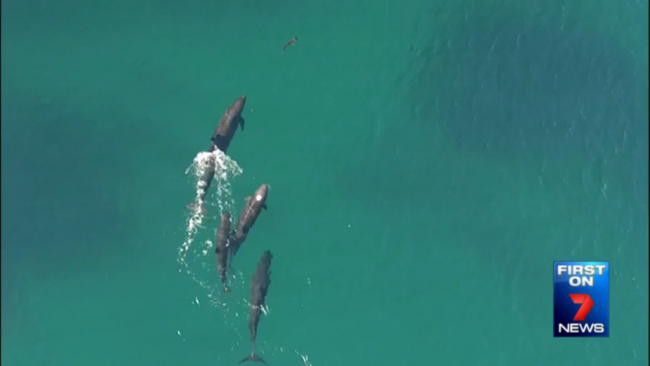 A high-speed chase off the coast of Australia claimed the life of a juvenile shark after it was hunted and eaten by a group of false killer whales. Video of the hunt was captured by photographer Bruno Kataoka and broadcast on local TV station 7 News Sydney. The hunt went down off the coast of Cronulla, a suburb of Sydney. Kataoka spotted the whales chasing their prey while flying a drone with an camera attached, and he followed the hunt until a whale lunged from below and captured the shark in its jaws before dragging it down into the depths.

Marine biologist Georgina Wood, interviewed by 7 News Sydney, says that the whales seen in the video are almost certainly false killer whales based on their size and coloration, although it is difficult to say for certain. It isn't clear what species of shark fell victim to the whales, based on the video. False killer whales, as their name suggests, bear many similarities to orcas, but they are not directly related. The two belong to the family Delphinidae, but fall into two separate genera. False killer whales are predatory mammals, and are known hunt other smaller cetaceans, such as dolphins. They're clearly not averse to sharks, although it is not known if they're a common part of the whales' diet. The whales normally stick to warmer waters and travel in pods, and their diet is composed mainly of large fish such as tuna. They are not currently listed as being in danger, although the fishing industry poses the largest threat to their survival. They compete with fisherman for their main food source, and also run the risk of being caught in fishing lines or killed in industrial fishing nets. Not much is known about false killer whales — the little information we have comes mostly from isolated sightings and dead specimens that wash up on shore. This video offers a rare glimpse at their behavior in the wild.