Was Georgia the Cradle of Wine? Who Cares, Let's Drink! 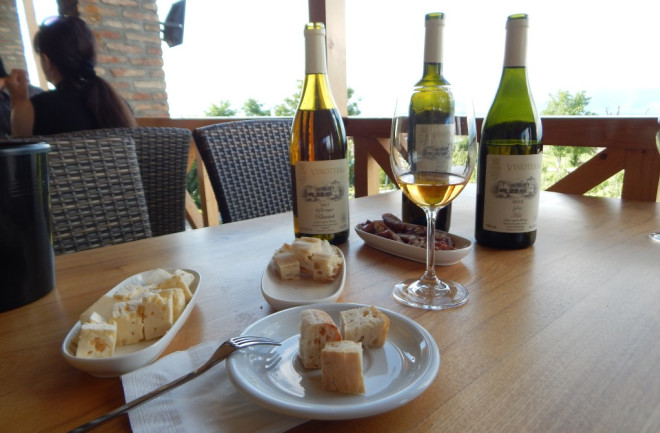 Qvevri wines from the Schuchmann winery, made in the ancient Georgian tradition. Rkatsiteli, the amber-colored wine in the glass, is a white typical of the Kakheti region, where it was produced: the juice is macerated for months with stems, skin and pips, giving it a distinctive color. Credit: G. Tarlach Time to wine. Right now, countries in the mountainous southwest corner of Asia are duking it out for a prize probably worth millions in tourist dollars: bragging rights as the birthplace of viticulture. Archaeological and paleobotanical evidence is mixed. Researchers have found 7,000-year-old pottery from Iran's Zagros Mountains with residues of grape byproduct. They've also unearthed what seems to be a 6,000-year-old winery in Armenia. So far, however, the oldest evidence are remains of domesticated grapes from the Republic of Georgia that clock in at about 8,000 years old. Regardless of whether Georgia is the birthplace of wine, much of their production is still done using a traditional method that probably dates back to some of the earliest vintners. On a recent trip, I knew I'd have to give this unique wine a try. For science, you understand. Just this past week, an Italian-Georgian team of researchers announced they'd found traces of wine in a vessel dating back 5,000 years at a site about 100 kilometers from the capital city of Tbilisi. Some scientists believe Georgia has the best claim to being the cradle of viticulture because of the high genetic diversity of grapes, wild and domesticated, found within its borders: some 500 species. The logic is that the place where Vitis vinifera vinifera has been established the longest would show the greatest range of variation. The truth is, we'll probably never know who figured out first that if you mush grapes up and let the juice sit for a bit in contact with the skin (where wild yeasts naturally hang out), after a while you'll get a tasty beverage with a bit of a kick. It's quite possible, with all the grapes around the region and natural human ingenuity (especially when it comes to drinks with a kick), more than one home vintner figured out how to make wine.

The Napa Valley of the Caucasus

What interests me is whether Georgian wines produced traditionally are different than, say, your average three-buck Chuck from Trader Joe's. So I headed to the famous Kakheti region in the east of the country, stretching from the Caucasus Mountains to the semi-desert of Azerbaijan, to tipple in the name of science.

A Kakheti vineyard looks out onto the Great Caucasus. Credit: G. Tarlach Kakheti produces about 70 percent of Georgia's wine, much of it in the qvevri style that had piqued my curiosity. Qvevri wines are produced using enormous clay vessels called, oddly enough, qvevri. These vessels are still made by hand. In fact, they're only made by hand, and typically hold 1,000-2,000 liters, though some have a volume of 5,000 liters. The qvevri are built into the floors of buildings ranging from wineries to private homes — during my travels I also saw them in monasteries and castles. Traditionally coated in wax on the inside, qvevri are used and re-used for generations. You may be wondering how they clean them: Some lucky soul climbs in and scrubs things down between vintages.

Staff member Ilia shows off qvevri used for wine production at Kakheti's Schuchmann Winery. Credit: G. Tarlach. After mashing up a harvest (some still do it with their feet), qvevri winemakers dump the whole shabang into the vessel: the juice, the skins, the stems and pips. One thing qvevri vintners don't add: yeast. Most modern wine producers rely on commercial yeast for their product — something that's increasingly a cause for concern in the industry because the yeast has very low genetic diversity and could be more susceptible to novel pathogens or environmental changes. But qvevri production involves only naturally-occurring yeast found on the grapes' skins, residually on the vessel and, like in the production of sourdough bread, captured from the air. The vessels are filled to about 75 percent capacity so they don't explode as the yeast go to town. For a period of a couple weeks or so, the qvevri is unsealed and occasionally stirred. Because it's buried in a floor, the internal temperature of the vessel hovers at around 70 degrees Fahrenheit. I'm a baker, not a brewer or vintner, but my understanding that's pretty low but not crazy-low for fermentation. After that initial period of open fermentation, once the solids (known as "chacha" in Georgian) sink, the qvevri is then sealed with clay and a disc of wood or stone (while the commercial qvevri producer I visited, Schuchmann Wines, stoppers the vessels with a tidy, hygenic seal, smaller operations and hardcore traditionalists top things off with dirt).

Wine of Gold and Black

The wine-in-progress will stay in the qvevri up to six months. That prolonged contact with the grape solids (which doesn't happen in most other styles of production) gives qvevri wines a distinct color. The whites are golden or honey-colored and the reds, known as "black wine" in Georgia, have a noticeably deep hue. While it's no surprise that these wines are higher in plant pigments than those produced via modern industrial methods, some research has suggested that qvevri wines, both white and red, are also significantly higher in other polyphenols, including those touted as having antioxidant and antimicrobial properties.

Saperavi, a typical red wine of Kakheti, stays in contact with the grapes' skins, stems and pips for an extended period, giving it a hue as black as my heart. Credit: G. Tarlach The qvevri wines never see the inside of your typical commercial winery massive stainless steel tank, but once pumped out of the qvevri (today's producers do make some concessions to modernity and skip the old school ladling), they may sit in oak barrels for another six or so months and are then bottled. And then...they sit for a few months more before they're made available. It takes up to two years from harvest to market for a qvevri wine.

Cellars at Schuchmann full of qvevri wines awaiting their time. Credit: G. Tarlach. Designated as Intangible Heritage by UNESCO, the qvevri method likely goes back millennia. At other archaeological sites I visited in Georgia, it seemed the qvevri vessels were everywhere, from the cave city of Vardzia to the medieval ruins of Dmanisi. While I didn't see any holes in the floor of guesthouses where I stayed, many family homes throughout the country still reportedly make their own wine using vessels buried right in their living room or kitchen. Yeah, Yeah, But How Does It Taste? After driving through the vineyards of Kakheti and catching the heady aroma of fermentation in Schuchmann's cellars, I sat down for a tasting of five qvevri wines. And you know, they did taste different than other wine I've had, most of them fuller and smoother than your average budget pinot noir. (I'm no wine snob; I did okay in my wines training at culinary school, but I believe that had to do with, ahem, a long familiarity with the beverage rather than supertaster skills.) I'll spare you all my tasting notes (because seriously, isn't reading another person's tasting notes like being subjected to a slideshow of selfies from someone else's vacation? Not that that is at all what I'm doing in this post...). But I will say the 2014 Saperavi, a dry red, finally made me understand what wine afficionados mean when they go on (and on) about a wine being supple. It was so soft and velvety I wanted bedding made out of it. But perhaps the most interesting was the 2013 Rkatsiteli. Technically a white wine, it was a gorgeous amber in the glass. From looks alone, I was expecting something like an Eiswein, a sticky-sweet dessert wine. The nose (wait...maybe I am a wine snob!) was strongly floral and reminded me of a nice Gewurztraminer, with some orange blossom. The taste was... really good. (Nope, definitely not a wine snob. Whew.) It was not at all sweet, as its hue suggested. Instead it was dry but complex, revealing different florals and exotic fruits and a pleasant herbaceousness as it swirled around my mouth. It lingered several minutes as my tour guide/tasting enabler Ilia and I talked. The whole time he explained how special the Rkatsiteli amber wine is to Kakheti, I was thinking about just grabbing the bottle and running for my car. Instead I finished the tasting and bought a bottle to take home. I'll be opening it for my birthday and no, you're not invited. For more about the qvevri vessels and the unique traditions of Georgia wine-making, it's worth checking out this ten-minute video on UNESCO's site. Make sure your speakers are on. While the narration is in Georgian with English subtitles, you'll get to hear some of the country's beautiful traditional music near the end. Till next time, let's raise a glass to science, and to the study of enduring traditions such as qvevri.