Virus and bacteria team up to save aphid from parasitic wasp

Viruses and bacteria often act as parasites, infecting a host, reproducing at its expense and causing disease and death. But not always - sometimes, their infections are positively beneficial and on rare occasions, they can actually defend their hosts from parasitism rather than playing the role themselves.

In the body of one species of aphid, a bacterium and a virus have formed a unlikely partnership to defend their host from a lethal wasp called Aphidius ervi. The wasp turns aphids into living larders for its larvae, laying eggs inside unfortunate animals that are eventually eaten from the inside out. But the pea aphid (Acyrthosiphon pisum) has a defence - some individuals are infected by guardian bacteria (Hamiltonella defensa) that save their host by somehow killing the developing wasp larvae.

H.defensa can be passed down from mother to daughter or even sexually transmitted. Infection rates go up dramatically when aphids are threatened by parasitic wasps. But not all strains are the same; some provide substantially more protection than others and Kerry Oliver from the University of Georgia has found out why.

H.defensa's is only defensive when it itself is infected by a virus - a bacteriophage called APSE (or "A.pisum secondary endosymbiont" in full). APSE produces toxins that are suspected to target the tissues of animals, such as those of invading wasp grubs. The phage infects the bacteria, which in turn infect the aphids - it's this initial step that protects against the wasps.

Oliver set up populations of pea aphids that were all genetically identical. Some of them carried H.defensa in their bodies while others did not, and of the infected individuals, some were also ridden with the APSE-3 phage. He unleashed the wasp A.ervi upon all of these individuals, and waited. 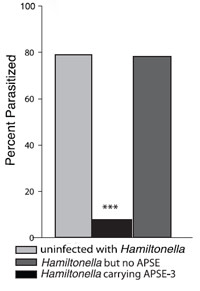 The results clearly demonstrated the importance of having both virus and bacteria - with the full alliance intact, less than 10% of the aphids fell victim to the wasp. If one or both of the partners was absent, the wasp successfully parasitized 90% of its potential hosts. Without the phage, the aphids might as well not have been infected by H.defensa at all, for all the good it did.

The phage bestows protective powers on the bacteria thanks to a single gene that encodes a toxic protein. It also makes a lot of it - the toxin-producing gene is almost three times as active as one of the most active genes in the bacterium's own genome. How exactly this poison kills the wasp is unclear and it's worth noting that H.defensa's has toxins of its own. The most intriguing possibility is that somehow the viral and bacterial poisons work together to kill the wasp, but that's a theory to be tested in the future.

In lab conditions, the alliance between bacterium and virus is a very stable one, but in the wild, H.defensa has a bad habit of spontaneously losing its all-important phage lodger. Even within a single aphid, only some bacteria have viral genes integrated into their own. No one knows why the virus should disappear so frequently. Perhaps it's not an entirely welcome tenant and its presence carries some sort of cost that occasionally outweighs its benefits. Perhaps only phage-free H.defensa can be passed on from aphid to aphid.

Regardless, case of the pea aphid is a great example of the role of phages as vehicles for genes, shuffling them between bacteria and providing the carriers with extra superpowers. In almost all cases, these gene transfers affect the ability to cause disease. It's a phage that carries the CTX toxin that the bacterium Vibrio cholerae needs to cause cholera. It's a phage that carries the Shiga toxin that turns harmless strains of Escherichia coli into a bug capable of causing severe food poisoning.

The APSE-3 phage is different - its toxin, far from turning its host into a more effective parasite, actually turns it into an anti-parasite defender. Faced with an enemy that threatens them all, the virus, the bacterium and the aphid have formed an evolutionary alliance, with infection as its foundation.

Of course, not all parasitic wasps are foiled by viruses - some have managed to turn them into biological weapons, stealing their genes and using them to subdue their caterpillar prey...