VIDEO: A Sea Turtle's Perspective of the Great Barrier Reef 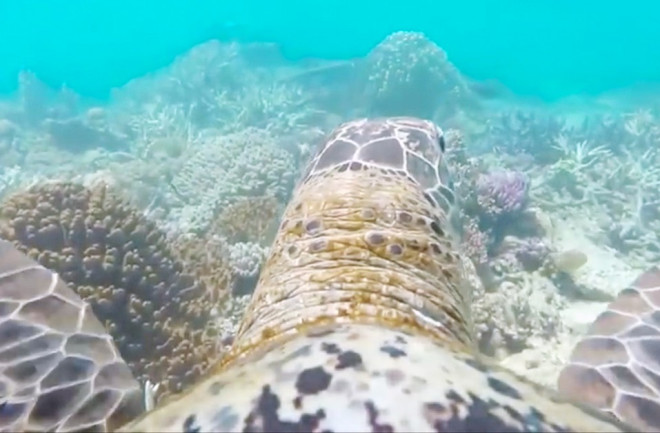 (Screengrab from YouTube/WWF) If you ever wondered what it would be like to cruise with those ultra-chill turtles from “Finding Nemo,” here’s your chance. Thanks to the World Wildlife Fund (WWF) and a GoPro, we can get a turtle’s-eye view of what it’s like to swim under the sea. And this turtle isn’t swimming through some nondescript stretch of the ocean; it’s gliding through Australia’s Great Barrier Reef, a landscape that’s equally beautiful as it is threatened.

Video With a Purpose

The Great Barrier Reef stretches some 1,800 miles along Australia’s coast and is considered the world’s largest ecosystem — it’s home to over 6,000 species, including 1,500 species of tropical fish. Some of the sea turtles and giant clams that call the reef home are over 120 years old. And, for the accountants our there, the reef also generates billions of dollars in tourism every year. Unfortunately, pollution and climate change are posing serious threats to the Great Barrier Reef ecosystem, and WWF has been putting pressure on the Australian government to take the necessary steps to preserve this irreplaceable habitat.

WWF produced this amazing video to remind us all that the Great Barrier Reef is amazing, but also perishable.

Recently, WWF and other environmental groups launched an effort to have the reef listed as “in danger” by the UNESCO cultural agency. The designation would require the Australian government to step up its efforts to protect the reef. On Wednesday, UNESCO’s heritage committee acknowledged the reef’s precarious situation, but stopped short of designating it “in danger.” The Australian government now has until 2016 to show its rescue efforts are working, and until 2019 to prove it has halted the decline of the reef. If it fails to do so, the reef could get slapped with an “in danger” label in 2020. For its part, Australia announced it would increase funding for reef monitoring by $8 million during talks this week with the World Heritage Committee in Bonn, Germany. Just one year ago, the government had approved plans to dump millions of tons of dredge spoil from port expansions into the reef’s waters. There’s certainly an uphill climb for those who wish to see the reef healthy, but, for a few minutes at least, this graceful sea turtle can take our minds off these pressing issues.