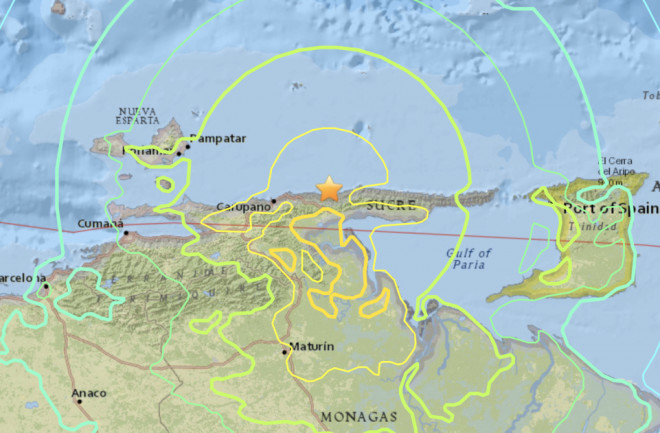 Venezuela was hit by a M7.3 earthquake today, causing extensive damage across the northern part of the country as well as nearby Trinidad & Tobago. Shaking was felt as far away at Bogotá, Martinique and Guyana, thousands of kilometers from the earthquake’s epicenter. This temblor may have been the largest earthquake to strike Venezuela since a M7.7 hit off of Caracas in 1900.

Video and images of the earthquake have quickly found their way to Twitter, so here are some examples (special thanks to Austin Elliot for some of these links):

The depth of the earthquake meant the shaking was felt widely across the region and from the looks of it, there was some sustained shaking but that depth might also mean that massive destruction was avoided. Some reports suggest that only minor to moderate damage was seen (see below) in cities relatively close to the epicenter. No injuries have been reported so far, however, news is slow to come out of the country due to its current political crisis

The region where the earthquake struck is tectonically complicated, with the Lesser Antilles subduction zone just to the east and a strike-slip boundary running across northern South America and the Caribbean Plate. Today’s earthquake was not a strike-slip event like one might expect for the region. Instead, it was a reverse fault where plates are moving towards each other at a depth of ~123 kilometers. This might suggest that the earthquake was rooted in the South American plate’s subduction:

August has been a busy month for earthquakes, with 8 M6.5 or greater earthquakes, including a M8.2 that hit Fiji on August 19. That earthquake was centered very deep — about 563 kilometers down (so in the mantle!) — so it did not cause as much shaking felt at the surface as today’s Venezuela earthquake. Before anyone jumps to the conclusion that this cluster of earthquakes means something, Dr. Lucy Jones made it clear that this is just business as usual: