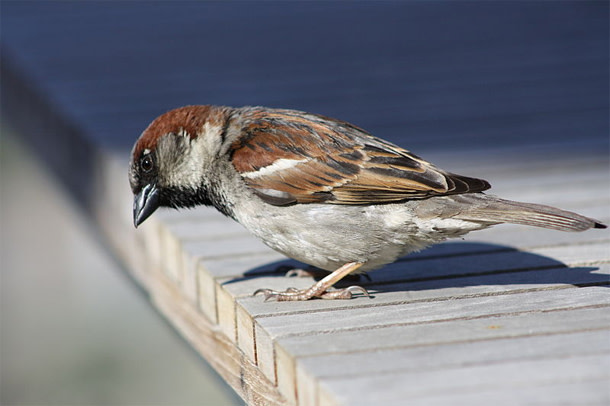 When Rachel Carson wrote her famous book Silent Spring, she envisioned a world in which chemical pollutants killed off wildlife, to the extent that singing birds could no longer be heard. Pesticides aside, we now know that humans have challenged birds with another type of pollution, which also threatens to silence their beautiful songs – noise. A man-made world is a loud one. Between the din of cities and the commotion of traffic, we flood our surroundings with a chronic barrage of sound. This is bad news for songbirds. We know that human noise is a problem for them because some species go to great lengths to make themselves heard, from changing their pitch (great tits) to singing at odd hours (robins) to just belting their notes out (nightingales). We also know that some birds produce fewer chicks in areas affected by traffic noise. Now, Julia Schroeder from the University of Sheffield has found one reason for this. She has shown that loud noises mask the communication between house sparrow mothers and their chicks, including the calls that the youngsters use to beg for food. Surrounded by sound, the chicks eat poorly. “City noise has the potential to turn sparrow females into bad mothers,” says Schroeder. Her work is important because it shows how exactly man-made noise could affect birds. Only a handful of other studies have done this. We know that house finches spend so much effort on making themselves heard that their songs are shorter, and thus less sexy. Zebra finches fail to hear their partners’ calls, eroding the bonds between otherwise monogamous mates. There are other possibilities: noise could stop birds from proclaiming their territories or warning of danger. Schroeder cut through the competing hypotheses by studying a unique group of sparrows living in Lundy Island, a small body of land in the Bristol Channel, England. Sparrows are short-distance fliers so the Lundy population is fairly self-contained, and scientists have been studying them for 12 years. They know every individual, and have tracked them through their entire lifespan. Eggs are regularly swapped between nest boxes, so parent birds become unknowing surrogates for unrelated chicks. These “cross-fostering” experiments allow scientists to tease apart the influence of the sparrow’s environment from that of their parentage. In March 2001, a set of electrical generators were switched on in the island. They run continuously from 6 am to 9 pm, and produce 70 decibels of noise – about as much as a rowdy primary school classroom. You have to speak up to be heard. Schroeder compared a set of sparrow nest boxes within this zone of noise to those at three distant quiet zones. The noise wasn’t obviously harming the parent birds. It didn’t affect how many eggs the females laid, how intently they attended to their clutch, or how much they weighed. And the nestboxes near the generators attracted birds or all ages and from all walks of sparrow life, so it wasn’t the case that the fittest birds took up the quiet real estate and left the noisy dregs for the weaker ones. For the chicks, it was a different story. They had a 25 per cent chance of living long enough to fledge if they lives in a quiet environment, but just a 21 per cent chance if they lived in a loud one – a small but significant difference. Those that survived weighed less if they lived in noisy neighbourhoods. This might be because, as Schroeder found, mother birds visited their chicks less often and provided them with less food. Schroeder acknowledges that she only looked at nest boxes in one noisy site, which may differ from the quiet ones in ways that have nothing to do with noise. However, she thinks that this is unlikely, since noisy nests were just as far from the sparrows’ feeding grounds as the quieter ones. And any widespread problem, like exhaust pollution, would have affected the parent birds as well as the chicks – Schroeder found that only the chicks were affected. “If what we suggest takes place in cities too, it is likely to play an important role in the sparrow population dynamic, and is probably one cause of the dramatic population crash that we are currently observing,” says Schroeder. Indeed, even though the house sparrow has spread to cities all over the world, it has started to disappear in Western Europe and North America. There are probably many reasons for this decline, but parental care is one of them. In a recent study, Gabor Seress from the University of Pannonia, Hungary, found that suburban sparrows provide their young with less food than rural birds, and the chicks grow smaller as a result. Schroeder’s study suggests that chronic noise could contribute to this difference. She now wants to work out exactly why the chicks get less food amid the generators’ hubbub. Maybe the parents can’t hear them begging. Maybe the chicks don’t beg enough because they can’t hear their parents return (their eyesight is poor at an early age). Maybe the noise drives off potential insect prey. “It will be interesting to compare stress hormone levels of parent birds and chicks from nestboxes in the noisy area, with those breeding elsewhere,” she says. “It would be interesting to experiment with noise-insulated nest-boxes.” (I wrote about how birds cope with noise for New Scientist years ago, so have a look at the feature (PDF) for some background.) Reference: Schroeder, Nakagawa, Cleasby & Burke. 2012. Passerine Birds Breeding under Chronic Noise Experience Reduced Fitness. PLoS ONE citation tbc Image by David Lofink