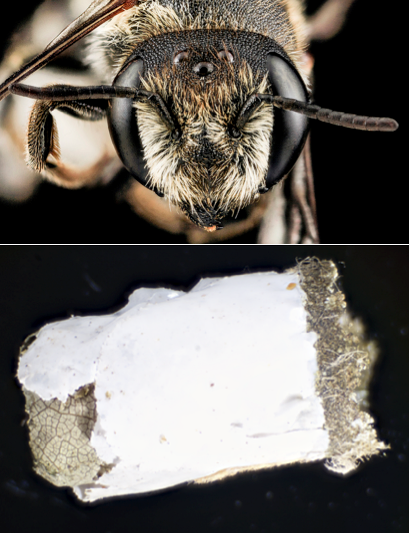 Scott MacIvor has cracked open hundreds of artificial bee nests. But two he peered inside in Toronto gave him pause. Within their containers, the bees he studies had carefully built homes for their young out of plastic debris. Mixed in with the usual construction materials of leaves and mud, MacIvor could clearly see bits of shopping bag. These aren't the hive-dwelling honeybees you know from your backyard. For his PhD research at York University, MacIvor studies so-called solitary bees. Megachile bees live on their own, feeding from and pollinating flowers. Females find a cozy space they can fit into—maybe a hole in a tree, or the inside of a plant stem—and begin building a nest inside it. They lay one egg at a time, tucked away with a little ball of food for when it hatches. Then they wall off the egg and food into a compartment, or cell, and start work on the next one. The adults don't live long, so the baby bees will be on their own when they hatch. MacIvor uses pieces of PVC piping to lure solitary bees and study the nests they build inside. It was while observing these traps such as these, which he'd set up around Toronto to study how an urban setting affects the bees, that he discovered some nests that were not exactly traditional

. Three cells of a Megachile rotundata nest included a glossy white material that he "could tell right away" was from a plastic shopping bag. There was also a Megachile campanulae nest with 2 cells incoporating a "plastic goo," MacIvor says, which he "had to have tested for its composition." The plastic bag pieces looked like they'd all come from the same bag. Microscopic and x-ray analysis by coauthor Andrew Moore showed that the "goo" in the other nest was a polyurethane-based sealant or caulk—something the bee might have found on the outside of a house. MacIvor says these bees probably gathered their unusual materials close to their urban homes. "Usually bees want to travel the shortest distance from the nest as possible," he says, so they can guard their eggs from parasites and spend more of their short lives building nest cells. The plastics were used alongside the other materials, as if bees picked them up out of convenience. In both cases, the nesting bees treated the new materials just like their usual ones. M. campanulae likes to build its nests with sticky plant and tree resins it collects in its jaws, so the gooey sealant was an easy substitution. M. rotundata prefers pieces of leaves, which it trims with its teeth like a leafcutter ant. MacIvor could see the bee's bite marks around the edges of the plastic bag bits, as if nothing were out of the ordinary. Cells built with plastic bags flaked apart more easily than normal ones, probably because they were missing the juice that would have oozed from cut leaves and helped hold things together. Despite this, all three eggs from cells containing plastic bags hatched into healthy new bees. Of the two sealant-containing cells, one hatched without a problem, though the other was parasitized. MacIvor notes that although cells made with plastic may not hold together as well—and might have other, unseen effects on developing bees—they could have advantages too. Plastic might keep parasites from breaking into a cell, for example. A few other animals are known to collect our trash for their building projects. Bowerbirds fill their nests with colorful trinkets to display to a potential mate. Sparrows and finches use cigarette butts

in their nests, perhaps to repel parasites. Unlike these techniques, however, MacIvor thinks plastic use by his bees is probably a fluke. There's likely to be "no real evolutionary consequence" for the species. Still, this fluke demonstrates how flexible the bee species that live in urban settings can be. "These spaces are under perpetual change and disturbance," he says. Only animals that can adapt to new circumstances and changing resources will be able to keep up—and that may mean building their nurseries out of our garbage.