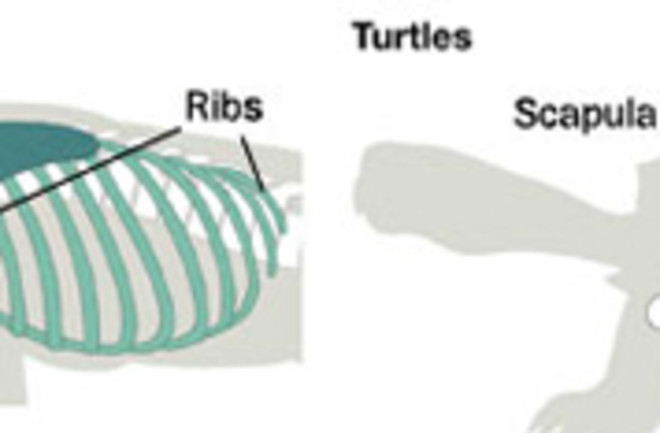 Of all vertebrate animals, turtles have one of the stranger body plans.

Unlike all other four-limbed critters, which have their shoulder blades riding on the outside of their ribs, the turtle's ribs are outside of its shoulder blades. This allows turtles to make their shell out of fused bones--the only animal to do so [ScienceNOW Daily News].

Now, scientists have determined that embryonic turtles develop this set-up through a neat bit of origami. Researchers compared the developing embryos of turtles, chickens, and mice to watch for the point at which turtle development diverged.

At first a turtle embryo grows much like a chicken or mouse. But then the developing body wall makes a critical fold, and the usual body plan starts to become an unusual turtle.... The developing muscle tissue that would lie along adult ribs in a standard amniote began to fold underneath itself in the turtle. This tissue tucked inward, bending up to lie below the developing ribs. On this kinked-under section, the shoulder blades, or scapulas, formed [Science News].

The study, reported in the journal Science, is another example of how small changes during embryonic development can lead to major differences in body shapes. Says study coauthor Shigeru Kuratani:

"Developmental changes in evolution give rise to an enormous diversity of animal forms. No matter how exquisite it may seem, as if it were some sort of magic, evolution is at most a good trick.... In case of turtle evolution, a major part of the trick was found to be (this) embryonic folding" [BBC News].

Previously, some evolutionary biologists had suggested that turtle shells formed from bony plates in the skin that gradually fused together to become armor, but this new study supports the alternate theory that shells derived instead from bones. Study coauthor Rolf Ericsson

says their finding also supports the conclusions of a Chinese study, which last year reported finding a 200-milion-year-old half-shell turtle fossil. In that study ... the scientists concluded the half-shell turtle, Odontochelys semitestacea, proved the outer shell of turtles came directly from the ribs and backbone and not from the skin [ABC].

Related Content: 80beats: Turtles Escaped Global Warming Via a Freshwater Highway in the Ocean 80beats: A Clue to the Evolutionary Riddle of How the Turtle Got Its ShellImage: Shigeru Kuratani and Hiroshi Nagashima