Many animals depend on stealth to catch prey, but a small tentacled water snake resorts to downright trickery. That's what a Vanderbilt University scientist found when he analyzed the way the snake captures fish, according to a study published in the Proceedings of the National Academy of Sciences. The snake, which is native to Southeast Asia, takes advantage of a well-known reflex that fish possess. The mechanism occurs when a fish's ear senses changes in water pressure due to movement nearby, which

is all it takes to initiate the fish's escape response, called the C-start -- one of the most well studied neural circuits in vertebrates. Two large nerve cells, known as Mauthner cells, run along either side of the fish's body and detect water disturbances. The cell closest to the signal will fire action potentials that stimulate trunk muscles on the opposite side of the body while simultaneously inhibiting the muscles on the near side. As a result, the fish turns away from the disturbance and flees. This whole process takes less than a tenth of a second [The Scientist]. The reflex causes the fish's body to form a "C" as it turns away from the source of the underwater vibration—but in this case, that leads the fish right into the snake's jaws.

Researcher Kenneth Catania was watching water snakes in an aquarium when he noticed that fish seemed to swim right into the snake's mouth. It wasn't until he took a high-speed video of the snake as it fed, however, that he got to the root of the snake's technique.

The snakes' motions take only a few hundredths of a second — too fast for the human eye to follow. However, its prey reacts even faster, in a few thousandths of a second [LiveScience]. 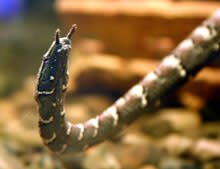 The hungry tentacled snake first curves its body into the shape of a J. As it prepares to strike, the snake twitches to produce the sound waves that initiate its prey's C-start reflex. That twitch is produced not by the snake's head but by its body, Catania discovered when he lowered an underwater microphone into an aquarium holding the snake and fish.

Fish ears sense which way the predator's sound waves are coming from, thus allowing the fish to prepare for a speedy departure in the opposite direction [ABC News].

In this case, the sound waves cause the fish to turn away from the snake's body, and therefore to flee right into the snake's mouth. Related Content: 80beats: A Mating Strategy Involving Giant Sperm Has Stood the Test of Time 80beats: Built-In Mirrors Help Spookfish See in the Dark Ocean Depths 80beats: Fish Living in a 5-Mile Deep Trench Caught On Film