Tree leaves keep the same temperature from tundra to tropics

A Canadian spruce and a Caribbean pine couldn't live in more different environments. One sits amid freezing tundra and the other basks in tropical heat. But despite their wildly different habitats, both trees have something in common - the temperature inside their leaves. Over the course of a year, their leaves manage to stay at a balmy average temperature of 21 degrees Celsius, the ideal temperature for photosynthesis. The amazing finding comes from a survey of 39 trees by Brent Helliker and Suzanna Richter from the University of Pennsylvania. The pair looked at both deciduous and evergreen species across the entire North American continent from its frozen north to the steamy south.

It would seem fairly easy to measure the temperature of a leaf directly but the problem is one of scale. You would need to take readings for hundreds of leaves to get a reasonable measurement for a single tree. Instead, Helliker and Richter opted for an unusual and indirect approach - they looked at the ratio of two forms of oxygen, ^16O and ^18O, in the wood of tree rings.

Working with wood seems like an odd choice if you want to study leaves, but the oxygen ratios of all these parts are inter-linked. The water molecules in any given leaf contain a mixture of the two oxygen isotopes. During photosynthesis, leaves use this water to produce sugars, which are then used in other parts of the tree to build larger molecules such as cellulose. All this while, the ratio of ^16O and ^18O stays the same. So if you measure the oxygen ratio in a tree ring, you're indirectly going back in time to measure it in the leaves when that particular ring was laid.

The ratio of ^16O and ^18O is closely linked to both temperature and humidity. The ambient temperature affects the relative abundance of both forms in rainwater, and therefore in leaves. And when the air is less humid, the lighter ^16O form evaporates from the leaf more quickly than the heavier ^18O. This means that high levels of ^18O relative to its lighter counterpart are signs of higher temperatures and higher humidity. It also means that if you have the oxygen ratio and you know how humid the air was, you can also work out how hot the leaves must have been. 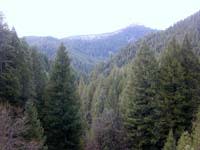 That's exactly what Helliker and Richter did. When they started their experiment, Richter had already collected large samples of tree-ring wood for a separate study and had oxygen ratios for all of these. The sampled trees were all chosen because they lived near to weather stations that had been collecting data on local climate and rainfall patterns, so the duo had humidity measurements too.

Using their data, they showed that the average leaf temperature for all 39 species was 21.4C, give or take a couple of degrees in either direction. Helliker and Richter believe that this represents the point where photosynthesis is most efficient.

They aren't however suggesting that a tree's leaves stay at the same temperature all-day or all-season long. Instead, 21C is more of a long-term target that the tree achieves on average over the course of a year. It suits leaves to stay at the best temperature for photosynthesis, but this needs to be balanced against other requirements, like the need to take in enough carbon dioxide. Because of these often competing demands and the vagaries of the environment, the temperatures of leaves can and will oscillate over time. But they do so around the ideal 21C mark.

To keep their green factories at this ideal temperature, trees heat up their leaves in cold weather and cool them down in hot climes. Mammals and birds, the so-called "warm-blooded" animals, also manage to maintain a constant internal temperature regardless of the environment. But we do it by burning fuel to generate their own heat. Trees use a different strategy; they keep their leaves at a constant temperature solely through manipulating physical processes like the evaporation of water and the reflection of light.

In hot conditions, leaves release water, which cools them as it evaporates from their surface; effectively, they sweat. Leaves can also hang at low angles where they catch less of the sun, or rebound some of the heat away with reflective hairs. In colder conditions, trees tend to bunch their leaves closer together, which reduces the rate at which individual leaves lose heat. It's the same principle that makes mittens warmer than gloves and huddled penguins warmer than stray loners.

These adaptations have enabled trees to colonise the planet, across its many different environments. But the idea that they could help trees to regulate the temperature of their leaves is a new one. Some other studies provide support the conclusion. One found that the leaves of conifers on a chilly American mountain were about 5-9C hotter than the surrounding air. Another team took thermal images of a Swiss forest and found the canopy to be 4-5C warmer than the cool alpine air.

The new results fly in the face of an historical assumption that the conditions inside a tree's leaves are coupled to those of the air around them, in both temperature and humidity. Many climate scientists use the oxygen ratios of tree rings to reconstruct the ambient temperatures of past climates. But this approach relies on a close match between the temperatures of leaves and air, a match that this new study calls into question.