Trapped in Amber, the Oldest Evidence of Pollination 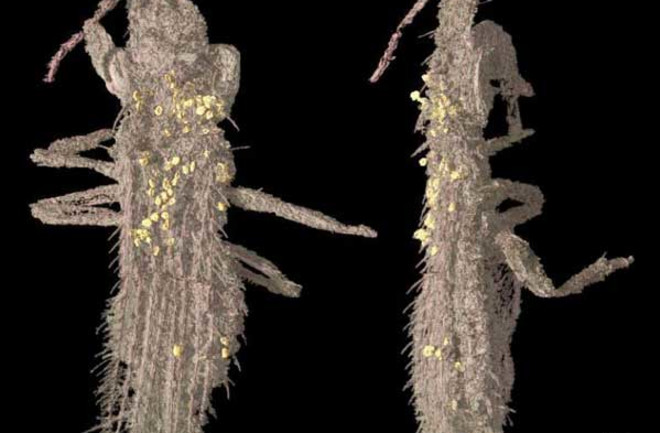 Peering inside an ancient piece of amber, scientists have uncovered the oldest direct evidence of pollination: insects covered in pollen grains, likely from a gingko tree, from between 105 and 110 million years ago. These insects---a new genus of thrips, insects that still scuttle around today---had likely gathered pollen for food, trailing it from plant to plant along the way. To get an even closer look at the specimens (without cracking open the amber), the researchers took the lump to the European Synchrotron Radiation Facility. There, they used synchrotron X-ray tomography to generate a detailed 3-D image of the bugs, revealing tiny, specialized hairs they used to collect pollen grains (which are shown here in yellow). Flowering plants first evolved about 130 million years ago, making them relative evolutionary newcomers; dinosaurs had already been around for 100 million years by then. Since early on, these plants have been aided in reproduction by insects that spread their pollen from one flower to the next, and in turn helped the insects by providing sustenance. "The co-evolution of flowering plants and insects, thanks to pollination, is a great evolutionary success story," said Carmen Soriano, one of the researchers, in a prepared statement---a story that, through finds like this one, we can watch as it unfolded.