If you live in the United States, then odds are that today, you're eating turkey. It's Thanksgiving — that's what we Americans do. Some fifty million turkeys are consumed in the states every year on Thanksgiving, keeping with a centuries-old tradition started by the first Europeans to come to this land. But the land has changed since the pilgrims shot their first wild turkey; forests have been clear-cut, making way for agricultural fields and urban centers. Rivers have been dammed and diverted, and many of the beasts and birds that once dominated the landscape have been depleted or exterminated. Even the turkeys have changed — they've nearly doubled in size from selective breeding, with breasts so large that they cannot fly or mate, needing human hands to perform the act of insemination using a device ironically akin to a baster. According to scientists at the University of Manchester, over 25 lbs of carbon dioxide emissions are produced to raise each chubby bird we consume. That means we pay for our Thanksgiving feast by releasing over 1.25 billion pounds of climate changing carbon dioxide into our already carbon-laden atmosphere. But there is another way. Rather than turkey for your holiday feasts, consider instead the delicious flesh of the turkeyfish.

You won't even notice the difference. Ok, you'll notice. But turkeyfish is better for you and the environment! Images from Wikimedia users TheKosher and Food Republic. Turkeyfish is one of the many names given to the venomous species in the subfamily Pteroniae, commonly known as lionfishes. The fowl nickname is said to come from their fins, which when fanned at the right angle, resemble the tail plumage of the popular birds. And like turkeys, lionfish bodies consist of delicious white flesh which would go perfectly with potatoes and cranberry sauce. Turkeyfish meat is easily some of the sweetest, flakiest, tastiest fish I've ever eaten, but I don't propose the swap simply because of that. There are two very good reasons to turn Thanksgiving's staple towards the sea: as a meal, turkeyfish are healthier for you and for the environment. If you sub turkeyfish for turkey, then gram for gram, you eat 40% fewer calories — and that's being generous, assuming you eat the leanest of the meat without any of the mouthwatering and artery-clogging skin (Let's be honest, we all could eat a little less over the holidays). But, like turkey, turkeyfish fillets are protein-rich, so you still get a boost of guilt-free energy. And like other fishes, lionfish are packed with heart-healthy omega fatty acids, giving them a nutritional edge over our favorite feathered foodstuffs. And turkeyfish even beat out other popular pisces: they have a higher concentration of omega-3 fatty acids than snapper, grouper, tilapia, tuna, mahi mahi, and other commonly-consumed species. But more importantly, turkeyfish are a devastating invasive species, and scientists say we need to eat them to beat them.

This gif tracks lionfish sightings every 5 years starting with the very first lionfish spotted off the coast of Florida in 1985, showing just how quickly these voracious predators spread. Data from USGS It's been decades since turkeyfish found their way into the Atlantic and Caribbean. The first invaders were likely released pets, which much like the pilgrims which landed on the shores of New England, quickly realized the bounty of their new home and began to take full advantage of the native inhabitants. Invasive lionfish have eaten their way across reefs, reducing native fish populations by almost 70 percent. The locals simply don't recognize the bizarrely shaped fish as threats. The turkeyfish are eating so well they're literally obese. And they're incredibly adaptable — they can eat just about anything that fits in their mouths, and live wherever they please, from vibrant reefs to thick seagrass beds and even miles upstream in estuaries. In some places, turkeyfish can be found in densities unheard of for such large, predatory fish; the sea floor thick with venomous spines like a spikey shag carpet. https://www.youtube.com/watch?v=JnAbtkMdCoI Sharks, groupers, and other native predators are helpless in the face of the turkeyfish invasion. But we aren't. Fishing pressure can successfully reduce these invasive populations. But fishing isn't cheap — these wily predators don't often bite hooks and live in places where drag nets would catch and tear. So to fish them without damaging other species or the places they live, we have to spear each and every individual by hand, which means that turkeyfish fillets are anything but cheap. But then again, we shell out more and more for Thanksgiving dinner every year. Some things are worth the money. 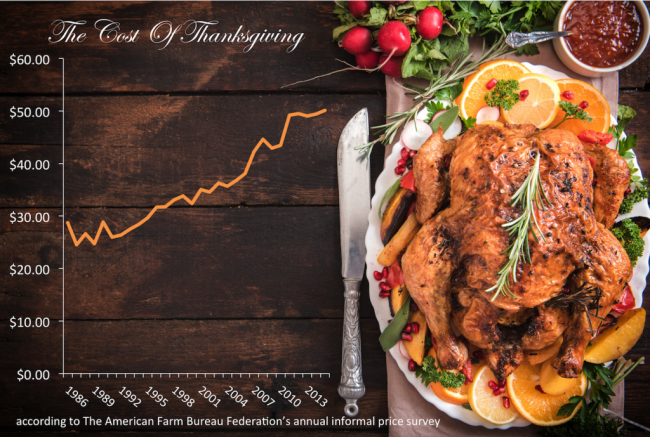 The cost of ingredients for a Thanksgiving meal for 10, according to The American Farm Bureau Federation's annual informal price survey. The average cost of this year’s feast for 10 is $50.11, a 70-cent increase from last year’s average of $49.41. Unfortunately, most can't find these fish fillets in their local grocery store. Turkeyfish meat is not sold widely throughout the U.S. It's mostly found locally in areas hit hardest by the invasion, particularly states like Florida and North Carolina. Supply will only increase when there's enough demand, which is where the shift from Turkey Day to Turkeyfish Day comes in. Order turkeyfish whenever you see it on the menu (probably labeled by the more common name lionfish). Buy the fillets if you see them in stores. Order them from online retailers like Sea to Table or Traditional Fisheries when they have them in stock. Use the power of your wallet wisely, and demand these fish by the truckload. As a species, we have a special talent for overfishing — it's past time we put that talent good use. We must pit our bottomless stomachs against theirs. Every turkeyfish removed from the Atlantic or Caribbean helps restore these marine habitats to their former glory. Every dead turkeyfish is equal to hundreds if not thousands of saved native fishes, species that are economically and ecologically important. Conservation stories are so often doom and gloom, with no hope in sight. Our best efforts are too little, too late. There are so many awful things about this world that we cannot change, but this, this we can do. We can make a difference when it comes to the lionfish invasion, and that's something to be thankful for.