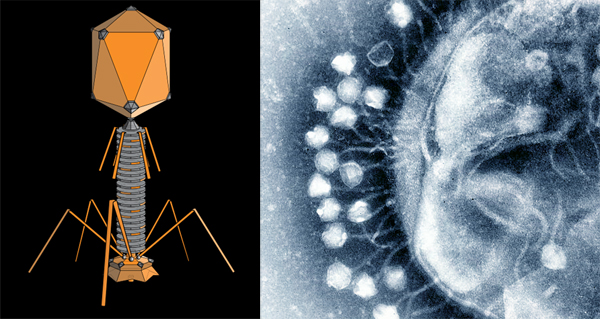 Even bacteria get sick. Tiny though they are, bacteria can be infected by even tinier viruses known as phages. Like tiny hypodermic needles, phages inject their genetic material into their bacterial hosts, turning them into factories for making more phages. The host usually dies in the aftermath. But some bacteria have turned these enemies into their allies. By adding the viruses’ DNA into their own genomes, they have become superbugs, able to tolerate harsh environments and shrug off antibiotics. Once phages have injected their genes into a bacterium, they can make copies of themselves in two ways. The first is a brutish approach. The genes commandeer the host, using it to manufacture new viruses that eventually burst out of the cell – this is the lytic cycle. Alternatively, the phage DNA can infiltrate the bacterium’s genome, becoming part of it. When the bacterium divides in two, it copies the phage’s genes along well as its own. This is the lysogenic cycle, an altogether stealthier approach to making more phages. Within the bacterial genome, the viral DNA is called a prophage. After being copied many times over in these new surroundings, it can pop out again to create a new phage. The prophage is little more than a genetic parasite. But sometimes, a prophage gets trapped by a crippling mutation. Unable to pop out, it becomes a genetic fossil, forever stuck within its host and destined only to preserve a trace of a past infection. These captives are called cryptic prophages and they can make up a fifth of a bacterium’s DNA. Their existence is puzzling. Bacteria are known for having small, streamlined genomes, yet in they have foreign and potentially harmful viral DNA loitering among their genes. Why? To find out, Xiaoxue Wang from Texas A&M University found all nine cryptic prophages from the common bacterium Escherichia coli and, with care and precision, snipped them all out. And to his surprise, the bacteria were the worse for it. The prophages weren’t essential by any means. Without them, the bacteria survived quite reasonably, although they grew more slowly than normal strains. But they proved to be wimps when challenged with difficult conditions. They became up to 400 times more sensitive to antibiotics. They succumbed more readily to extremely salty or acidic conditions. And they were almost completely unable to form biofilms – fortified ‘cities’ where the microbes gather under the shelter of substances that they themselves secrete. In many of these cases, Wang could weaken the bacteria by removing a single prophage, which suggests that many of the genes are active parts of the host. The cryptic prophages are no longer selfish parasites, nor are they truly passive fossils. Rather, they have been domesticated to serve their host. There are other examples of phages bestowing important powers upon the bacteria they infect. E.coli is typically harmless but if it gets infected with the right phage, it can turn into a monster that causes dysentery. The phage inserts two genes into the bacterium’s genome, which allow it to produce poisons called Shiga toxins. Phages carry the CTX toxin that the bacterium Vibrio cholerae needs to cause cholera. Phages allow the bacteria that causes anthrax to find shelter in the guts of earthworms. Phages even allow bacteria to come to the aid of aphids. But in these cases, the phage genes need to pop out of their host. In the case of the cryptic prophages, even though the viral genes stay put, the bacterium still reaps the benefits. Bacteria are great survivors, able to adapt to a wide variety of conditions, from oil-soaked oceans to arsenic-rich lakes to antibiotic-treated humans. Wang’s study suggest that phages could provide bacteria with new ways of coping with these environments, maybe even acting as vehicles for transporting genes from one species to another. He writes, “In effect, the cell uses the tools it obtained from its former enemy, phage, to cope with new environments.” Now that we know about these alliances, we could use them to our advantage. Wang suggests that we could find new ways of preventing bacteria from resisting our antibiotics by blocking the proteins produced by their domesticated viruses. Reference: Nature Communications http://dx.doi.org/10.1038/ncomms1146Image: Phage by AdenosineMore on phages: