From a fish with an anus on its neck to a marsupial that kills itself through sex, meet the creatures that debuted this year. 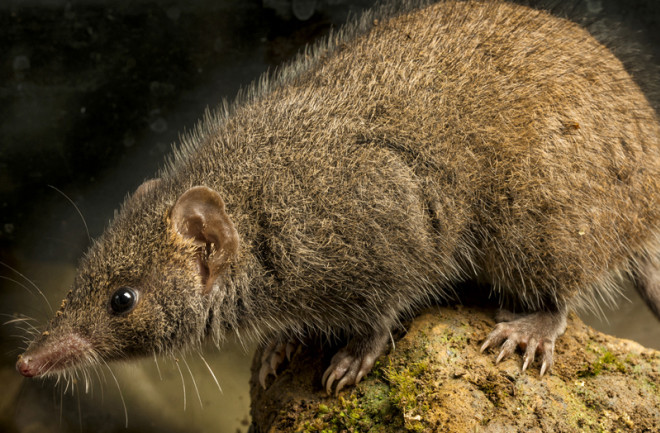 Humans have already discovered some 2 million different animal species on this planet, but some estimate there are over 1 million more to be found.

We're trying. Each year, scientists around the world discover some 17,000 to 18,000 new species, and 2014 was no different. Here, we've narrowed it down to five creatures that caught our eye.

Fun fact: Unlike others of its kind, A. hoosieri lacks a debilitating mutation in the rhodopsin gene, which is an important gene for vision. That means it could see just fine … if it had eyes.

Researchers named the fish after the Indiana Hoosiers basketball team — but not to imply the players might be visually challenged. The name honors several famous fish scientists who worked at Indiana University, as well as the species’s proximity to the university. Plus, the lead author is a Hoosier fan.

Description: Bright green; reddish-brown speckles on head and back

Fun fact:B. ankarafensis has a notable calling card: Instead of producing three clicks to attract a mate, the new species uses only two.

This missing click got researchers’ attention just in time. Although the froggies reside within the protected Sahamalaza–Îles Radama National Park, ongoing destruction of their habitat threatens their numbers, leading researchers to suggest a placement on the critically endangered list. Heeding their call could help save the species.

Fun fact: Finding a new mammal species is rare; finding one that kills itself through ardent and repeated sexual encounters is even more rare.

A. arktos follows the mating patterns of others in its genus, copulating for up to 14 hours at a time and with multiple partners in order to ensure the survival of its lineage. Yet these fervent sexual escapades take their toll: Males’ stress hormone levels increase dramatically during the weeks-long mating season, eventually causing their bodies to shut down completely. What a way to go.

Fun fact:L. lopezae’s namesake is none other than pop icon Jennifer Lopez. According to Vladimir Pešic’, the study’s lead author, J.Lo’s music kept the team upbeat while writing the manuscript for their paper. While it is the deepest-living marine mite, found nearly 230 feet below the ocean’s surface, its claim to fame is mainly in the name.

Fun fact: Although physically similar to water rats from nearby countries, W. mamasae is genetically more similar to the land rats of Sulawesi — meaning it evolved the same traits as other water rats without descending from the same line, via convergent evolution.

It represents not only a new species, but an entirely new genus. Yet it’s not new to everyone: The people of Mamasa (the species’s namesake) have long used the rat as a talisman to ward their homes against fire.