Too Many Sweets Can Leave Young Horses Jittery 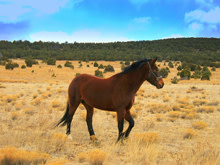 Apparently sugar highs aren't solely the domain of human adolescents—young horses get them, too. Trainers give younger horses a mix of sweet foods, like molasses, corn, and barley, to make their coats shinier and to put a little extra spring in their step before they meet prospective buyers. But this meal is much sweeter than a horse's normal hay diet, and the sugar rush makes them a little ansy. Jan Bowman and Wade Black from Montana State University gathered a dozen quarter horses for their test. Bowman allowed only half of them to eat sweet grains; Black then trained the horses without knowing which were which, and tracked their performance. The sugar-filled horses had higher heart rates, Bowman says—they were also less obedient, and more anxious about being separated from the herd. Still, trainers shouldn't hold out on sweet grains forever, Bowman says—maybe just keep them away from young horses during the first few weeks of their training, when the animals are most likely to be nervous. Like us humans, they probably just need their sweets in moderation.