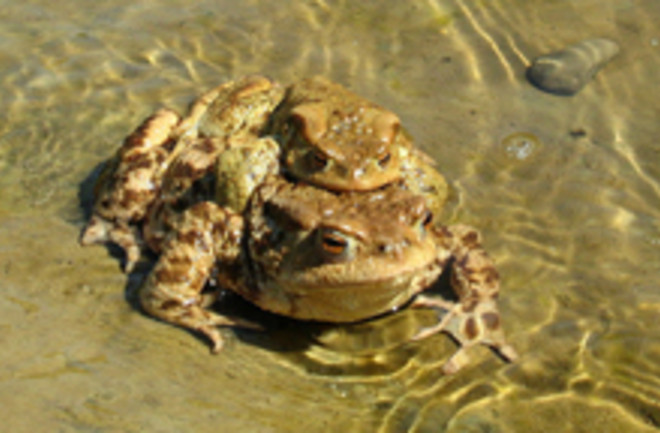 The wave of high-profile seismic activity so far in 2010 has been another reminder that we humans could use all the help we can get in predicting earthquakes. This week in the Journal of Zoology, biologist Rachel Grant suggests a new way: Watch the toads. Taking cues from the animal kingdom is not itself a new idea (not by a long shot):

Reports of animal earthquake prediction are legion and they date back to at least 373 BCE, when historians record that animals including rats, snakes and weasels flocked out of Helice just days before a quake devastated the Greek city. More recently there have been reports of catfish moving violently, bees leaving their hive in a panic, and fish, rodents, wolves and snakes exhibiting strange behaviour before earthquakes [Nature]

. While these anecdotes grab the imagination, the scatter-shot nature of earthquakes previously prevented anyone from documenting such animal behavior before, during, and after a quake. But Grant did, and by sheer luck. Her team was studying common toads in Italy in April 2009 when the amphibians began to disappear from the study site. This didn't make much sense to her, the toads abandoning a breeding site in the midst of breeding season. So the researchers tracked them.

They found that 96 percent of males -- who vastly outnumber females at breeding spots -- abandoned the site, 46 miles (74 kilometers) from the quake's epicenter, five days before it struck on April 6, 2009. The number of toads at the site fell to zero three days before the quake [Washington Post]

. Grant says her initial reaction to the mass toad dispersal was annoyance—their flight was holding up her research. However, when they began to return the day after the earthquake, things began to make more sense. Even in this study, where scientists happened to be in the right place at the right time to catalog this long-rumored animal activity, one can't know for sure that seismic activity is the direct cause of the toads packing up and taking off. In an evolutionary sense, though, it seems logical: If the toads can pick up environmental clues that a quake is imminent they could flee to higher ground, someplace safer from rock falls and other hazards. Says Grant,

"Our findings suggest that toads are able to detect pre-seismic cues such as the release of gases and charged particles, and use these as a form of earthquake early warning system" [BBC News]