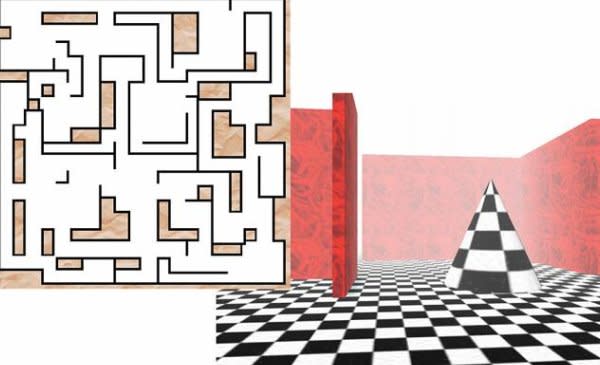 It seems obvious that thinking about something will help you to remember it better, but it might be more surprising to know that this process works even more efficiently when we’re asleep. Erin Wamsley from Harvard Medical School has shown that people who are trained to navigate a virtual maze learn the best route through it more quickly if they dream about their experiences. The last decadeofresearch has clearly shown that sleep is one of the best aide memoires that we have. During this nightly time-out, our brain can rehearse information that it has picked up during the day and consolidate them into lasting memories. Wamsley’s new study supports that idea but it also shows that dreaming while you nap can strengthen our memories even further. 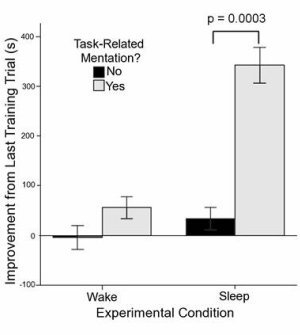 She asked 99 volunteers to learn the layout of a complex virtual maze so that they could reach a specific landmark after being dropped at a random starting point. Five hours later, they were tested again. Those who had stayed awake in the intervening time beat their previous times by 26 seconds, but those who had had a 90-minute nap improved by a whopping 188 seconds. But those who dreamt about the task fared even better. Wamsley either asked her recruits directly about whether they dreamt about the labyrinth, or asked them to give an open-ended report of everything that was going through their mind while they were asleep. Either way, those who had thought about the maze during their short nap improved far more than those who didn’t. They also beat those who mentally replayed their training again while awake. These striking results suggest that there’s something special about the mental rehearsals that happen during dreaming sleep. However, the dreams weren’t straightforward replays of previous experiences. When the volunteers described their dreams, they didn’t mention specific objects, locations or routes through the maze. Instead, some talked about isolated parts of their experience, like the music or the prospect of a re-test. Others discussed tangential memories, like other mazes or being stuck in a bat cave (heh). Interestingly, scientists have found the same thing in rodents. A sleeping rat will show similar brain activity to its prior bout of wakefulness, but the two patterns won’t quite match up. It’s a very exciting set of results. We know that forcefully repeating pieces of information can make them stick in our minds. But this study shows that we can do even better through a passive unintentional process where the material to be learned is only tangentially referenced! Wamsley doesn’t think that dreams themselves improve our memory – they’re a side effect of processes that do this. While our bodies lie still, our brain is busily working away processing the day’s memories. The brain doesn’t simply replay those memories, as the volunteers’ descriptions show. Instead, Wamsley thinks that it works the old into the new, slowly integrating parts of our recent experiences into our more established memory networks. Dreams, then, are like the tip of a mental iceberg – the visible sign of a tremendous body of work going on behind-the-scenes. Certainly, people who dreamt about the maze at all included those who found the training most difficult. It seems that their initial difficulties meant that their brains were more likely to continue processing the information they learned after they nodded off. Based on this idea, it’s tempting to suggest that the best time to study intensely is just before you go to sleep, or that a quick nap after an afternoon swotting session is a good idea. Reference: Current Biologyhttp://dx.doi.org/10.1016/j.cub.2010.03.027More on sleep: