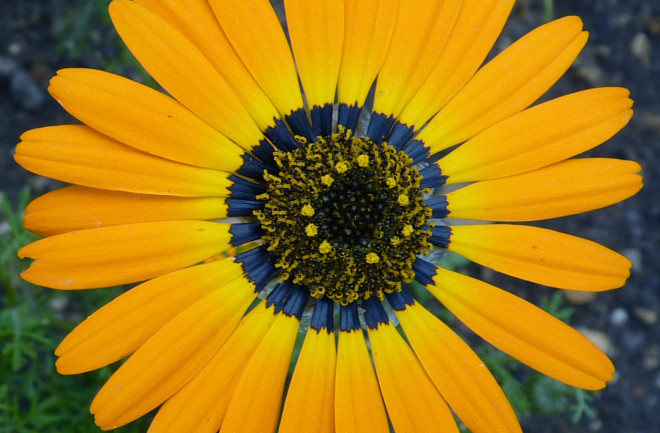 A daisy showing the faint blue halo that helps pollinators find their way to nectar. (Credit: Edwige Moyroud) Subtle halos on flowers function as bright blue landing pads for bees. Tiny ridges on flowers, visible only at the nanoscale, serve to reflect blue and ultraviolet light that draws in pollinators. To bees, it appears as a ring around the flower's center, and lets them and other insects immediately differentiate between a nourishing plant and a dead end. The trait seems to have appeared many times throughout the evolution of flowers, and likely dates back to the emergence of pollinators some 100 million years ago. Humans can see the ring in some cases too, on the "Queen of the Night" black tulip, for example, but the visuals are reserved mostly for bees, who can see wavelengths of light extending into the UV spectrum that are invisible to us. Whether bees' vision or flowers' hues emerged first is unknown, but it's an example of how evolution often intertwines separate, yet dependent, species.

What's also unique is that the blue color isn't the result of pigmentation, as is the case with most flowers' vibrant coloring, but from the structure of the petals themselves. Researchers from the University of Cambridge analyzed flower petals under a scanning electron microscope and found a persistent pattern of ridges and striations. While they first appeared to be random, using a special tool for measuring tiny angles called a goniometer, they found that all the different flowers they looked at were disordered in a way that produced the same effect. These chaotic angles serve to capture incoming light and emit a muted blue sheen that pollinators can pick up on.

A scanning electron microscope image of the ridges on a flower petal. (Credit: Edwige Moyroud) In tests with bees, published Wednesday in Nature, the researchers saw that the insects were much better at finding sweet nectar treats when they were placed near surfaces that mimicked flowers' blue coloration. They went a step further, too, and made surfaces that produced the halo without the iridescence that often comes with it to make sure the bees were really seeing something different. Not only were they better at finding nectar that was marked by the halos, they even learned to distinguish between sweet solutions and bitter ones based on whether it was present after a bit of training. The trait must have evolved independently in different flowers at different times, the researchers say, because the color-producing ridges looked quite different in various kinds of flowers. That the end result is the same, though, is an indication that the blue halos really do confer a significant advantage. Both monocots and eudicots, the two main flower groups, possess the trait, although not every flower has it.