To Cope With the Chaos of Swarming, Locusts Enlarge Their Brains 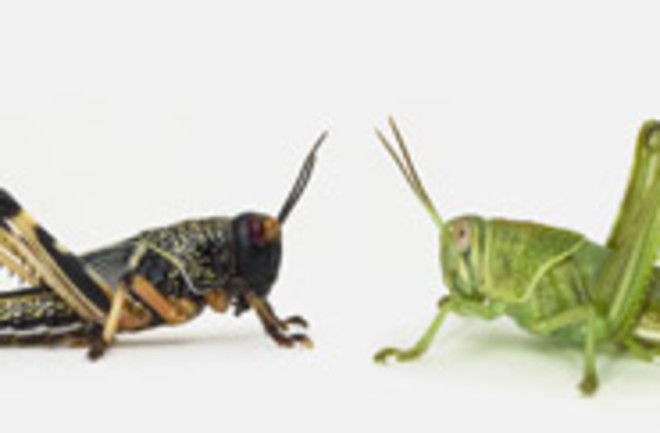 The single-mindedness that drives a swarm of locusts to rampage through the countryside and devour everything in its path might not seem like it would require a great deal of brainpower. However, biologists in Britain have found that the brain of a swarming locust swells up to 30 percent larger than the brain of its solitary counterparts. These crazed grasshoppers aren't geniuses, says lead researcher Swidbert Ott. According to his study forthcoming in the Proceedings of the Royal Society B, swarming locusts simply need enlarged brains to cope with the assault on their senses that comes with being caught up in an insect mob:

Locust brains are quite simple: on each side of the head is an optic lobe taking in information from the eyes and performing basic processing, and these lobes feed into the central midbrain, which carries out higher-level processing.

In swarming locusts, the midbrain grew more than the optic lobes. This, and other subtle changes, suggest that because swarming locusts are constantly surrounded by wild activity, they do not need to worry about having particularly sensitive vision. However, they do need extra high-level processing power to cope with the extremely complex patterns of motion that they see [New Scientist].

Locusts need this improved brainpower to survive, because despite the fact that they travel in these legendary hordes like a plague ordered from on high, the truth is that they don't much care for each other. In good times, locusts are solitary; they gather into swarms when they need to seek out new vegetation to survive. Says Ott:

''Their bigger and profoundly different brains may help swarming locusts to survive in the cut-throat environment of a locust swarm.... Who gets to the food first wins, and if they don't watch out, they themselves become food for other locusts" [The Telegraph].

The suddenness with which locusts change behavior and even appearance when they go on the march has long fascinated Ott and his team.

Dr Ott and his team had previously shown that a signalling chemical in the brain, called serotonin, was crucial in this sudden change in the insects' behaviour - causing a solitary creature to become part of this frenzied swarm. When this sudden behavioural change happens, the locusts also (much more gradually) change in colour and even body shape [BBC News].

DISCOVER: Hunger on the Wing