To Boldly Grow Where No Sperm Has Grown Before: in a Petri Dish

: For the first time in medical history, scientists have successfully grown mouse sperm in a laboratory. As Northwestern University cell biologist Erwin Goldberg told New Scientist, "People have been trying to do this for years." It's hoped that being able to grow sperm outside the testes will lead to improved fertility treatments for men. How the Heck: 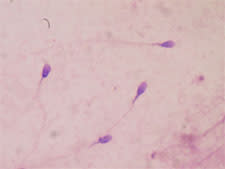 Next Up: This technique still needs to be proved in humans, and if it is, it could have wide-ranging effects. For example, in the future, doctors might be able to extract testicular tissue from young boys---who haven't yet developed mature sperm---and then grow sperm in the lab. Or for infertile men, doctors could extract germ cells, produce sperm, and then find out what's wrong with them. Reference: "In vitro production of functional sperm in cultured neonatal mouse testes" Takuya Sato et al. doi:10.1038/nature09850