To Attract Mates, This Dino May Have Shaken a Tail Feather 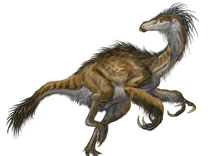 For feathered dinosaurs, it appears that fashion came before function. A new study of a dinosaur fossil found in northeast China has revealed that the dinosaur, Beipiaosaurus, not only had the soft downy feathers that have been spotted in other fossils, it also had a more primitive type of feather that appears to have been used only for peacock-like displays. These primitive feathers don't cover the dinosaur's entire body, they're

found only on the creature’s head, neck and tail. The filaments couldn’t have generated lift, so they’re not flight worthy, and they’re too sparse to have retained the creature’s body heat. [Lead researcher Xing] Xu and his colleagues therefore speculate that the filaments served as display structures, just as many similarly placed feathers do on modern birds [Science News].

The feathers detected on the Beipiaosaurus, which lived in the Cretaceous Period, have a very basic structure. The modern-day feathers sported by birds are elaborate constructions with numerous fibers that branch out from a central filament and hook together.

This arrangement is so complicated that many scientists theorize it could have evolved only once.... But paleontologists have proposed that a variety of simpler structures — including peculiar, branched structures colloquially called “dinofuzz” — evolved before feathers [Science News].

The new discovery reveals an even earlier piece of the evolutionary puzzle: the proto-feathers that Beipiaosaurus sported on its head, neck and tail are long filaments without any branches. The results also suggest that the first feathered dinosaurs evolved earlier than we thought, researchers reported in the Proceedings of the National Academy of Sciences [subscription required]. Similar quill-like structures

have been found on Psittacosaurus, or "Parrot Lizard," as well as some pterosaurs. The researchers therefore suspect the common ancestor of these creatures -- along with Beipiaosaurus, which lived 125 million years ago -- had the early feathers too [Discovery News].

The first rudimentary feathers may have appeared in the Middle Triassic Period about 235 million years ago, Xu suggests. The display feathers could have been used in mating rituals, Xu says, or in fights to defend territory.

"Most previous studies suggest that insulation might have been the primary function for the first feathers, but our discovery supports that display represents one of the earliest functions for feathers," Xu said, adding that "flight function appears very late in feather evolution." The discovery negates the prior theory that feathers and flight co-evolved. It instead indicates pterosaurs, birds and other fliers recruited already existing feathers for flight [Discovery News].