Titan dinosaur may have stored minerals in skin bones 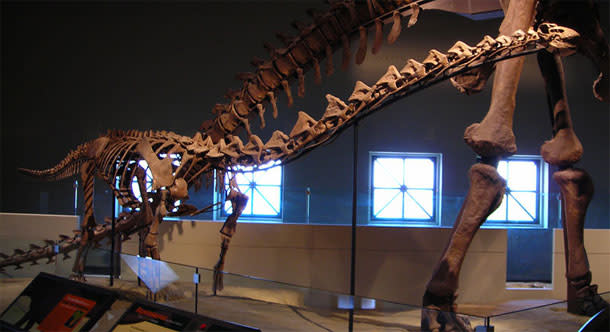 In the Field Museum of Natural History, there is a piece of bone about the size of a child’s torso. It’s an osteoderm – a scale-like bone embedded in the skin of an animal. In this case, the owner was Rapetosaurus, one of the giant armoured dinosaurs known as titanosaurs. The osteoderm probably sat on the animal’s back, and the standard interpretation is that they provided a sturdy defence. But Kristina Curry Rogers from Malacaster College thinks that these “skin bones” did something else. She was the scientist who discovered Rapetosaurus, and she has been analysing two new osteoderms from northwest Madagascar, where the titan used to live. The larger of these is the biggest one ever found – 57 centimetres in length, 27 across and 19 deep. It’s also hollow. When Rogers put the bone in a CT scanner, she found a big cavity inside it, big enough to hold five litres. She now thinks that the osteoderm was a store for minerals that the dinosaur could draw upon when times got tough. The two new osteoderms that Rogers has been studying come from a juvenile Rapetosaurus and an adult. The structure of the smaller juvenile bone is much like those of other reptiles, but the adult’s one is unique. Rogers thinks that Rapetosaurus remodelled its osteoderms as it grew older, expanding an existing small hollow into a much larger cavity. 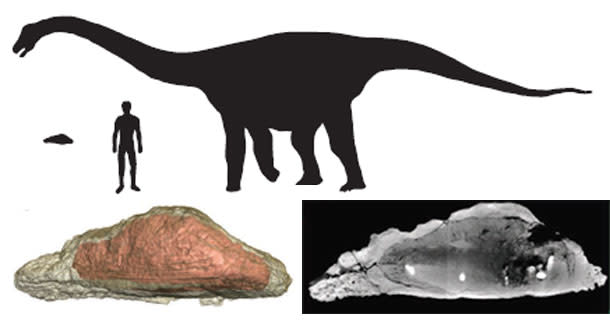 Today, osteoderms give the backs of crocodiles their distinctive bumpy appearance. But these “skin bones” had their heyday in the time of the dinosaurs, where they contributed to the formidable armour of several groups of prehistoric reptiles: the plate- and spike-backed stegosaurs; the huge titanosaurs; the tank-like ankylosaurs and their non-dinosaur counterparts, the aetosaurs; and at least one predator – the horn-nosed Ceratosaurus. Mostly, osteoderms would have served as armour. They were also typically rich in blood vessels, which might have allowed the reptiles to control how much heat they absorbed or lost. They might also have helped species to recognise one another, or to display during social rituals. But Rogers thinks that Rapetosaurus’ osteoderms did none of these things. They were too non-descript to be used in display, too thin-walled to act as armour, and too sparse to function as either a shield or a heat-exchanger. Rapetosaurus probably only had a few of these bony scales at specific parts of its body. Palaeontologists have only found 10 osteoderms in Madagascar, despite a wealth of titanosaur fossils. It’s possible that the scales have been displaced, but Rogers notes that the dinosaurs were buried by viscous debris, which wouldn’t have carried the osteoderms far from the rest of the animal. Instead, Rogers’ best guess is that the osteoderms were a reservoir – a back-up generator that the titan could use to fuel its growth when food was scarce. Such lean times would have been a regular part of its life. Rapetosaurus lived in a seasonal environment, where conditions changed dramatically throughout the year, and intense droughts were common. Supply was unstable, but its demands were great. Like most of the other long-necked giant sauropods, Rapetosaurus grew to its maximum size very quickly, and probably gave birth to lots of young over its lifetime. It would have needed a lot of minerals to fuel the growth of its bones, and the development of its young. By hoarding minerals, the hollow osteoderms could have allowed Rapetosaurus to soldier on in an unforgiving environment. Reference: Rogers, d’Emic, Rogers, Vickaryous & Cagan. 2011. Sauropod dinosaur osteoderms from the Late Cretaceous of Madagascar. Nature Communications http://dx.doi.org/10.1038/ncomms1578Image: by Lisa Andres More on dinosaur body parts: