Tiny Skull Shows a Dino in Transition to Vegetarianism 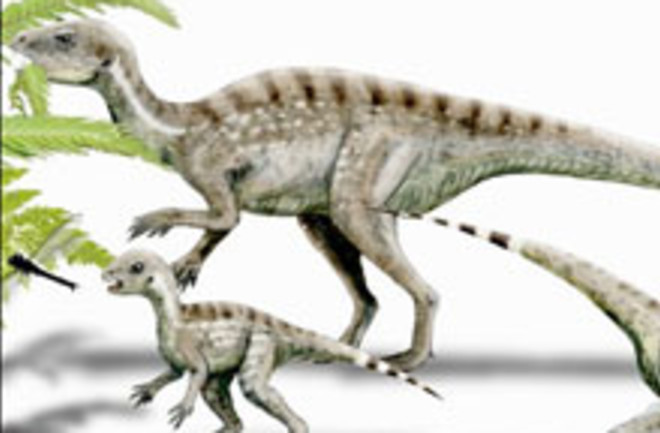 The tiny skull of a juvenile dinosaur with a strange set of chompers has delighted paleontologists, who believe it proves that the species was a transitional phase between carnivorous dinosaurs and herbivores. The Heterodontosaurus has both sharp canine teeth for biting and molars for grinding, suggesting that the species dined on both small reptiles and insects as well as leafy greens.

Says study coauthor Laura Porro: “It’s likely that all dinosaurs evolved from carnivorous ancestors. Since Heterodontosaurs are among the earliest dinosaurs adapted to eating plants, they may represent a transition phase between meat-eating ancestors and more sophisticated, fully herbivorous descendants” [Telegraph]. The omnivorous dino lived 190 million years ago in the Early Jurassic period, Porro says.

Only two other Heterodontosaurus fossils have been found previously, and those both belonged to adults. This newly discovered fossilized skullmeasures less than 2 inches in length and belonged to a juvenile weighing less than two sticks of butter… [The researchers] studied the juvenile’s skull and determined the individual was probably buried alive in a sandstorm, a mode of death that left its remains in “relatively good condition” [Discovery News].

The study, which will be published in the Journal of Vertebrate Paleontology, settles a debate over the Heterodontosaurus. The sharp canine teeth had been observed before in the adult specimens, and some paleontologists believed the teeth were a sexually dimorphic characteristic, present only in males and probably used to fight other males over territory and mates. But the researchers found the juvenile already had a fully-developed set of canines. “The fact that canines are present at such an early stage of growth strongly suggests that this is not a sexually dimorphic character, because such characters tend to appear later in life,” [study coauthor Richard] Butler said [LiveScience]. Instead, the teeth seem to have been used for eating.

If the Heterodontosaurus was evolving into an herbivore, it wouldn’t have been the first dinosaur to do so: There were other plant-eating dinosaurs at the time of Heterodontosaurus including the long-necked sauropods. But this little creature was one of the earliest of the ornithischians that soon become very important in the Age of Dinosaurs. Later [vegetarian] ornithischians included the duck-billed dinosaurs, horned dinosaurs such as Triceratops and tank-like dinosaurs such as Ankylosaurus [Reuters].