Our teeth are a mystery. The set we grow during late childhood stays with us throughout our lives, biting and chewing thousands of times a day. They can withstand forces of up to 1,000 newtons and yet, the material that coats them - enamel - is little tougher than glass. How does this extraordinarily brittle substance not shatter into pieces every time we crunch a nut or chomp on an apple? 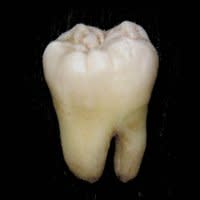 Herzl Chai from Tel Aviv University found the answer, and it's a surprising one. At a microscopic level, our teeth defend against fractures by developing with cracks already built in. These pre-made defects are known as "tufts" because of their wavy appearance. They are scattered throughout the enamel and share any physical burdens placed on a tooth, so that no one part has to take the full brunt.

By pressing down on individual teeth using a metal rod, Chai found that it's relatively easy to create a crack in a tooth, but much harder to actually make it grow bigger to the point where the tooth properly breaks. The tufts, together with structures that prevent cracks from growing, are responsible - they allow us to chew without catastrophe. Our teeth aren't built to avoid damage, but they're incredibly good at containing it.

Humans aren't alone in this - Chai compared out teeth to those of sea otters, and found the same adaptive features under a microscope. It may seem like an odd pairing, but we share a fondness for hard-shelled foods with sea otters - we like nuts and seeds, while they can't get enough of shellfish. These similarities are reflected in our teeth. 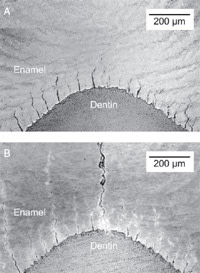 Both species have tufts, found at the boundary where the outer layer of enamel meets the inner layer of dentin. By taking pictures of tooth slices before and after they were compressed, Chai found that the tufts are the source of any larger fractures. As the pressure increases, the occasional tuft gets much larger and breaks away from its neighbours. But for the most part, they grow very slightly and in unison, shielding each other from the full force of the stress. This shielding explains why it's easy to start a crack in a tooth, but difficult to finish it.

Chai also suggests that the tufts help to bridge the physical differences between the hard, brittle enamel and the softer, more flexible dentin lying underneath it. That protects the dentin, by providing a smoother gradient between the otherwise starkly different properties of the two materials.

Other microscopic feature make it harder for individual cracks to get larger. Enamel consists of thousands of cylinders called "prisms" or "rods", each consisting of aligned mineral crystals. The prisms are arranged in rows, which can often cross over one another like a basket weave. On a cross-section of a tooth, you can see this weaved pattern as alternating dark and light lines. 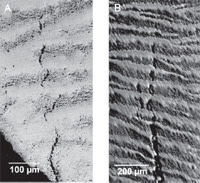 By regularly switching their direction, the prisms make it harder for cracks to grow in any particular one. In the images on the right, you can see cracks in a human and a sea otter tooth being disrupted by these alternating bands. Cracks grow so slowly in enamel that they usually have time to fill with fluid, which helps to glue them together. Our teeth are so resistant to damage that they have enough time to heal themselves.

Chai now wants to see if other animals share these same protective features. We know that chimps, orang-utans and gorillas have tufts too, and these may be a common adaptation to animals with blunt, relatively flat, molars. These so-called "bunodont" teeth are also carried by bears and pigs. As well as potential microscopic features, they have more obvious adaptations, such as thicker enamel and broader cusps, that allow their owners to crack hard foods while avoiding a mouthful of broken teeth.

Chai's work on the structure of enamel could also be very interesting for researchers looking to produce synthetic materials that mimic biological ones. It suggests that deliberately introducing weaknesses inside a material could actually make it tougher.