Deep beneath the ocean's surface lie the "black smokers", undersea chimneys channelling superheated water from below the Earth's crust. Completely devoid of sunlight, they are some of the most extreme environments on the planet. Any creature that can survive their highly acidic water, scorching temperatures and crushing pressures still has to contend with assaults from predatory crabs. What better place, then, to look for the next generation of body armour technology? 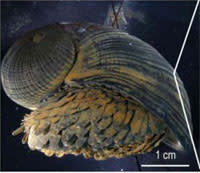 The scaly-foot gastropod (Crysomalion squamiferum) was discovered just 9 years ago at an Indian black smoker and it may have one of the most effective animal armours so far discovered. Its shell is a composite, made of three layers, each with different properties and made of different minerals. Together, they form a structure that's completely unlike any known armour, whether natural or man-made. It can protect the animal from the searing heat of its habitat, stop its precious minerals from dissolving away in the acidic water and resist the crushing, penetrating, peeling claw-attacks of predatory crabs.

Animals have been protecting themselves with armour long before humans starting shaping steel and Kevlar. To create a protective covering, human designers must account for a mind-boggling array of physical traits including thickness, geometry, strength, elasticity and more. But evolution can take all of those factors into account without the guiding hand of a designer, putting thousands of structures through the test of natural selection and weeding out the best combinations. The results are the culmination of millions of years of research and development and they are striking in their effectiveness.

Haimin Yao from MIT works in the lab of Catherine Ortiz, a group that has been studying the defences of animals including sea urchins, chitons, a group of marine molluscs, to the Senegal bichir, a type of armoured fish.

Yao discovered the secrets behind the snail's shell by slicing through it in cross-sections and studying its structure at a nanometre level. He even attacked it with a diamond-tipped probe, to simulate the crushing attacks of the crabs that frequent the black smokers. Using this data, Yao created a virtual simulation of the shell and put it through a digital crash-test, crab claws and all.

The outer layer is the thinnest but also the toughest. It's rich in iron sulphide nanoparticles and the snail is the only animal known to use these minerals to build a shell. There's good reason for this - the water around the black smokers is absolutely teeming with iron sulphides, so the snail has plenty of mortar for its construction needs.

When crushed by a crab claw, the outer layer cracks but that's all part of the plan. The cracks are tiny and jagged. They dissipate the energy from the attack and prevent larger cracks from forming - those could cause the entire shell to shatter. The tough iron minerals can also grind and erode the crab's claw - it's a defence that also weakens the attacker's weapon.

The middle layer is organic with no minerals to speak of. It's much thicker than the other one but it's also soft and spongy. It also helps to absorb the force from the crab's blows, dissipating their energy before it reaches the inner layer. The boundary between the outer and middle layers is wavy rather than flat, which reduces the risk that the two will simply disconnect and slide off one another.

Only when you get to the inner layer do you find calcium carbonate, the building material that most snails use to construct their shells. In the acidic water of a black smoker, an uncovered calcium carbonate shell would rapidly dissolve away, leaving behind a naked and vulnerable snail. Again, the three-layer armour comes into its own, with the outer and middle layers protecting the inner one from the acidic water, and from the frequent bursts of intense heat.

The rigid inner layer isn't useless though. It adds structural support and prevents the shell from bending. That foils one of the crab's main tactics - shoving its claw into the shell's opening and peeling off small chunks until it can reach the animal inside.

Yao says that this multi-layered armour could help to inspire the next generation of man-made defences. Potential uses aren't just limited to armour for people or vehicles, but sporting equipment or coverings for pipelines that are frequently hit by rocks. In particular, he's intrigued by the snail's use of an outer layer of iron nanoparticles as a sacrificial structure, designed to trap cracks and dissipate energy. That's an original idea as far as human design goes and one that the group will be eagerly following up. 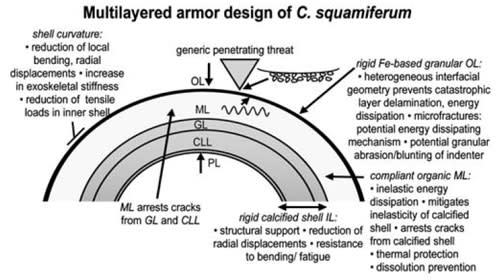