This Is the Farthest You Could Sail Without Hitting Land 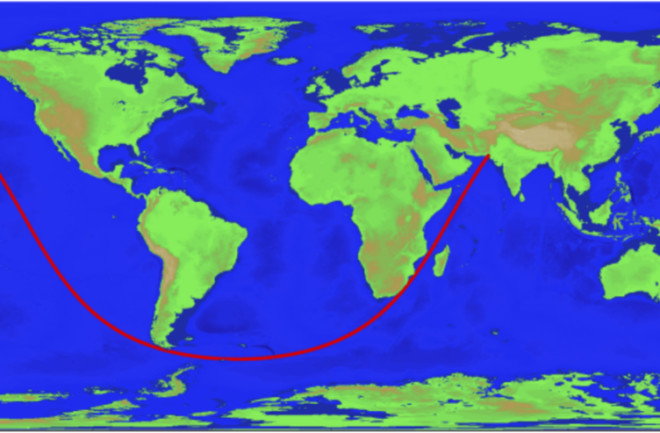 The longest sea route possible. Confused as to why it's curved? Check this out. (Credit: B. Chabukswar et al) When your reddit debate spurs a scientific paper, you know it's a good one. Back in 2012, reddit user kepleronlyknows posted a map to the r/MapPorn subreddit purporting to show the longest straight line you could sail around the planet without encountering land. It ran from Pakistan to Russia's Kamchatka peninsula, barely scraping by the east coast of Africa and tunneling through the Drake Passage off the tip of South America. All told, the line was almost 20,000 miles long — about four-fifths of the Earth's circumference. There was some debate at the time as to the veracity of the claim, but now, two researchers armed with a brand new algorithm have stepped in and they say it's legit.

Rohan Chabukswar and Kushal Mukherjee developed a means of testing the countless possible routes around the planet to find the one that stays at sea the longest. They started with something called a great circle, a term geographers use to describe any line that divides a sphere into two equal hemispheres, and is thus the longest circle you can draw. With their algorithm, they narrowed down which of the many great circles that span the Earth contains the longest straight line through the oceans. In a paper published to the pre-print server the arXiv, they used a "branch and bound" algorithm to sort through over 200 million possible great circles, and about 5 trillion data points total. It works by sorting all of the possible routes into branches, each of which contain a subset of similar solutions. By analyzing the subsets, it can eliminate branches entirely, and it goes through every branch until it finds the best one. By breaking that branch down into smaller and smaller groups, the algorithm will eventually arrive at the correct solution. Using their algorithm, it only took about 10 minutes of computing time on a laptop, the researchers say. Their solution was the same as the one proposed by kepleronlyknows, and it validates what he found — presumably without the help of an algorithm. The solution is only true for the moment, of course. As the continental plates shift, the longest route could grow longer, shorter, or shift to another location entirely. At one point, in the past or the future, a route spanning the full 25,000-odd mile circumference of the Earth might even be or have been a possibility. The researchers also do the same thing for land routes that don't touch water, and they say the longest of those runs from near Jinjiang, Fujian, in China and ends up near Sagres in Portugal. It's 6,984 miles long, though it's doubtful there are any roads that take you the whole distance.

The longest route on land. (Credit: B. Chabukswar et al) The researchers conclude their paper with these words: "The problem was approached as a purely mathematical exercise. The authors do not recommend sailing or driving along the found paths." So, there may be a new challenge for the "because it's there" crowd, but don't say you weren't warned.