Think your job is hard? Try mounting a camera on an alligator. 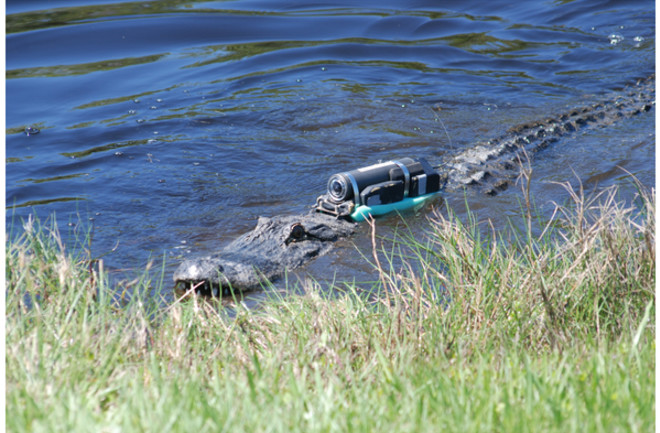 Studying alligator foraging behavior in the wild is pretty tough -- they're elusive, often underwater, and prefer to hunt at night. That's why these scientists chose a different approach: they (very carefully) attached a camera to the back of an alligator and let it do the work for them. The results gave them new information about the feeding behaviors of the animals, including the frequency with which they were successful in catching prey. Want to check it out for yourself? Check out the video below.Animal-Borne Imaging Reveals Novel Insights into the Foraging Behaviors and Diel Activity of a Large-Bodied Apex Predator, the American Alligator (Alligator mississippiensis) "Large-bodied, top- and apex predators (e.g., crocodilians, sharks, wolves, killer whales) can exert strong top-down effects within ecological communities through their interactions with prey. Due to inherent difficulties while studying the behavior of these often dangerous predatory species, relatively little is known regarding their feeding behaviors and activity patterns, information that is essential to understanding their role in regulating food web dynamics and ecological processes. Here we use animal-borne imaging systems (Crittercam) to study the foraging behavior and activity patterns of a cryptic, large-bodied predator, the American alligator (Alligator mississippiensis) in two estuaries of coastal Florida, USA. Using retrieved video data we examine the variation in foraging behaviors and activity patterns due to abiotic factors. We found the frequency of prey-attacks (mean = 0.49 prey attacks/hour) as well as the probability of prey-capture success (mean = 0.52 per attack) were significantly affected by time of day. Alligators attempted to capture prey most frequently during the night. Probability of prey-capture success per attack was highest during morning hours and sequentially lower during day, night, and sunset, respectively. Position in the water column also significantly affected prey-capture success, as individuals’ experienced two-fold greater success when attacking prey while submerged. These estimates are the first for wild adult American alligators and one of the few examples for any crocodilian species worldwide. More broadly, these results reveal that our understandings of crocodilian foraging behaviors are biased due to previous studies containing limited observations of cryptic and nocturnal foraging interactions. Our results can be used to inform greater understanding regarding the top-down effects of American alligators in estuarine food webs. Additionally, our results highlight the importance and power of using animal-borne imaging when studying the behavior of elusive large-bodied, apex predators, as it provides critical insights into their trophic and behavioral interactions." Bonus video from the main text: http://www.youtube.com/watch?v=rlhwN77E7-A Related content: Ever wonder what your outdoor cat does all day long? Behold the KittyCam!NCBI ROFL: Phase 1: Build army of alligators that can run on land. Phase 2: Take over the world!NCBI ROFL: How do alligator erections work?