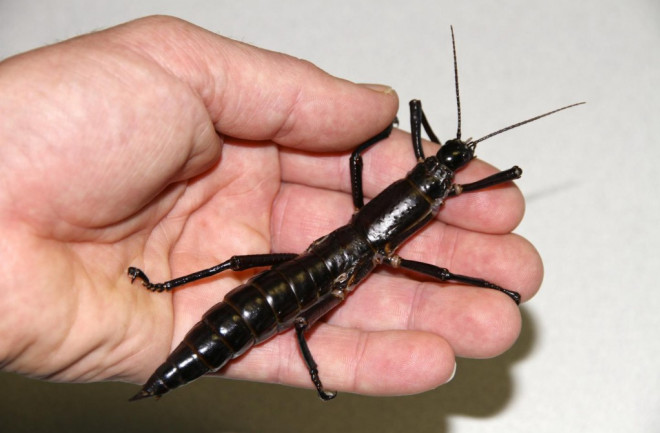 An adult female Lord Howe Island insect. (Credit: Rohan Cleave, Melbourne Zoo) Lord Howe Island stick insects are back for good. Nearly a century ago, they were exiled from their homeland by invasive rats and thought extinct, only to be rediscovered in 2001, confined to a lonely rock spire in the middle of the Pacific Ocean. The insects looked different though. They were skinnier and had lost some of their spines, raising questions about their origins. Now, a new genetic analysis confirms that the two are indeed members of the same species, Dryococelusaustralis,finally putting the mystery to rest and easing a potential re-introduction of the insects, also called tree lobsters, to Lord Howe Island. The giant insects live on massive volcano remnant known as Ball's Pyramid, a sharp tower of rock rising from the ocean about 12 miles from Lord Howe Island. A research expedition there in 2001 found stick insects clinging to the branches of a tea tree perched high on a ledge, and a subsequent trip successfully brought back a breeding pair to establish a captive colony in Australia. The plan was to set them free on Lord Howe again, but it's more difficult to do if they don't belong to the same species that was once there. To settle the question, researchers from Australia and the Okinawa Institute of Science and Technology took samples from the living insects and compared them to samples from museum collections of insects taken from Lord Howe. Writing in Current Biology, they describe how they obtained a full genome from the living insects, and mitochondrial DNA from both. It was enough to reveal that their genomes differed by only about one percent, within the accepted range for species.

(Credit: Rohan Cleave, Melbourne Zoo, Australia) The analysis also found that the living insects had huge genomes, something that could be related to the fact that they have three copies of each chromosome pair, where we just have one. The multiplicity of chromosomes, called polyploidy, is somewhat common in stick insects and may have conferred crucial advantages that allowed the insects to maintain an ascetic lifestyle on Ball's Pyramid. This hexaploidy helps stave off the mutative effects of inbreeding, something unavoidable in tiny populations. It's also been shown to help invasive species gain a foothold in the past, and often leads to giant body sizes — the tree lobsters can be up to six inches long. Though they numbered just 24 on Ball's Pyramid, a substantial colony of Lord Howe stick insects has been established in Australia and eggs were sent to Bristol, San Diego and Toronto to set up additional populations. There were reports that a small population had been introduced back to the island, though the continued presence of rats posed problems. There is a plan in place to drop 42 tons of rat poison on the island by helicopter, although some community members are still opposed to the plan. Doing so would pave the way for a successful re-introduction of the insects to their native home. It would be a homecoming almost 100 years in the making.