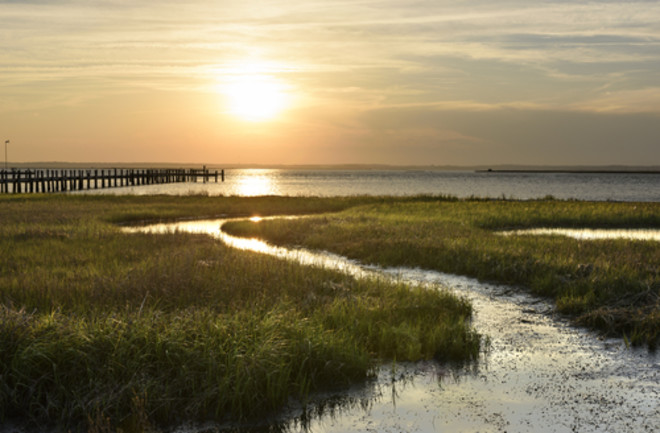 The tangy smell of the sea may seem like nothing more than salt in the air, but in fact it comes courtesy of a specific chemical. And dimethyl sulfide, or simply DMS, not only defines that airy aroma, but it also helps cool the climate. In a study published Monday in the journal Nature Microbiology, researchers say they’ve discovered vast new sources of this gas: millions of bacteria in coastal sediments. The findings suggest models that predict the influence of DMS, including its climate effects, may be underestimating its impact.

Marine organisms depend on a mouthful of a molecule called dimethylsulfoniopropionate, or DMSP. The chemical helps keep organisms alive by preventing them from losing water to the salty environs they live in. The molecule may also have antioxidant effects and could prevent tissues from freezing.

Ocean microorganisms break down DMSP into DMS, itself a critical nutrient that helps bacteria, seabirds and harbor seals find food. And when airborne, the molecule helps the climate. Atmospheric DMS helps reflect the sun’s UV radiation back into space, keeping Earth cool. The substance also cools the climate by helping to form the water droplets from which clouds take shape. As University of East Anglia molecular microbiologist Jonathan Todd, who led the new research, said in an email: “DMS is a ‘good guy’ gas.”

Scientists have long thought marine phytoplankton – microbes living close to the ocean’s surface that need light and oxygen to survive – were the only major DMSP producers. (The tiny organisms make about 6.6 billion tons each year). But a few years ago, Todd and colleagues showed bacteria can make DMSP as well. And they don’t need light or oxygen to survive. The discovery spurred a proposal: perhaps bacteria also make DMSP (and, indirectly, DMS) in places besides the ocean’s surface.

To find out, the researchers dug up mud and sediments from salt marshes and estuaries northeast of London. They found DMSP levels were 1,000 times higher in the mud than in seawater. The scientists predict there’s about 100,000,000 DMSP-producing bacteria per gram of mud.

“These levels are far higher than those in seawater, where phytoplankton likely dominant the process,” Todd said. He hopes the find helps researchers begin to see DMSP production as the province of multiple organisms in various environments.

Todd notes the discovery means researchers are considerably underestimating earth’s production of DMSP and the influence of DMS. He says models that predict the potential dynamics and impact of the molecules likely need some updating.

“Will they mitigate or worsen the problem?” Todd asked. We’ll have to wait for further investigation to know for sure.