There's Gold In Them There Trees! 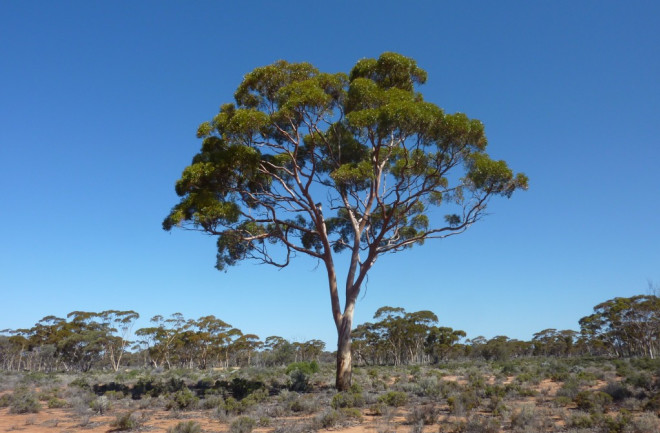 Eucalyptus trees in the Australian outback sometimes contain gold particles that can indicate untapped deposits. Credit: Mel Lintern. Money may not grow on trees, but apparently gold can. Using X-ray imaging, scientists found minute particles of gold in Eucalyptus trees growing above a deposit of the precious metal. The imaging proved the gold was not blown in by wind but rather absorbed by the tree's roots, traveling all the way to the leaves where it was most highly concentrated. Previous research had shown that vegetation growing above buried gold deposits could have minute concentrations of the metal. However the amounts were so small that scientists were unable to say definitively that the metal wasn't wind-blown or the result of contamination during sampling. Today's report was based on analysis of Eucalyptus trees growing over a known but unmined gold deposit about 100 feet below ground in Western Australia. It is the first to prove the theory that the trees, through their roots, can absorb particles of the metal. Researchers collected samples from the trees and also conducted greenhouse experiments to replicate the absorption process. The study is published today in Nature Communications. Gold discovery has declined significantly over the past ten years, note the researchers, and conventional means of exploration can be both expensive and highly destructive to the environment. Developing a new method of gold detection based on analysis of an area's vegetation could usher in a new — and more efficient — gold rush era.