The Story Behind The Killer Spinach 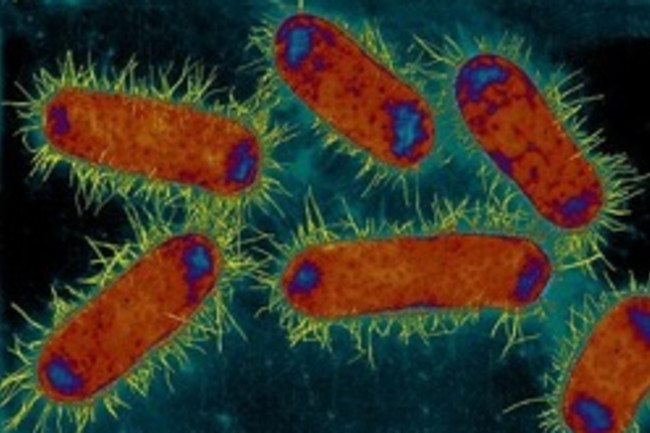 That's the word coming today from the FDA: they want everyone to avoid bagged spinach until they can get to the bottom of a nasty outbreak of Escherichia coli O157:H7, a virulent strain that infects an estimated 70,000 people in the United States and kills about 60. A number of people have gotten sick in the new outbreak, apparently from eating contaminated spinach, and there's been a report of one death in Wisconsin.

There's a fascinating--albeit gruesome--backstory to this outbreak, which I've been researching for my next book, a portrait of Escherichia coli. Escherichia coli is regular inhabitant of the human gut (not to mention the guts of mammals and birds). You carry about a trillion harmless E. coli. E. coli has also become the model par excellence for understanding the nuts and bolts of life. Lots of Nobel Prizes were awarded for research on these fascinating bugs.

Over the twentieth century, scientists began to discover that some strains of Escherichia coli are not so nice. A group of strains called Shigella cause diarrhea, for example, killing over a million people a year. And new virulent strains keep turning up. In March 1982, 25 people in Medford, Oregon, developed cramps and bloody diarrhea. The doctors identified a strain of Escherichia coli in some of the patients. The strain could not be found among the records of the Centers for Disease Control. That had never happened before. Three months later, another outbreak occurred in Traverse City, Michigan. The source of the bacteria proved to be undercooked hamburgers that the victims had eaten at a McDonald's restaurant. Scientists named the strain O157:H7--a code for its distinctive surface molecules--and began to hunt for it among the bacteria that had been isolated from patients in earlier years. Out of 3,000 strains collected from American patients, a single one proved to be O157:H7, isolated from a woman in California in 1975. Searches in Great Britain and Canada turned up seven more cases, none before 1975.

O157:H7 slipped back into obscurity for a decade. It emerged again in the mid-1990s in a series of outbreaks spread across the world. One outbreak in Washington State, spread in undercooked restaurant hamburgers, sickened 732 people in 1993. Four of them died. More outbreaks flared up in other countries. In Japan radish sprouts tainted with O157:H7 sickened 12,000 people in 1997.

The outbreaks mobilized a lot of scientists to figure out what in the world this pathogen was. It is one of many strains of Escherichia coli that live in cows and sheep, dwelling peacefully in their guts. About 28% of cows in the United States are estimated to carry O157:H7. It can get into people through contaminated meat thanks to bad butchering (a single crumb of undercooked meat carrying 100 bacteria is enough for a potentially fatal infection). The animals also release the bacteria in their manure, from which it can be spread to vegetables and fruits, perhaps by the wind, slugs, or flies. It is also the reason why you really must wash your hands if you visit a petting zoo.

Once it gets in our bodies, E. col O157:H7 starts causing serious trouble. It builds a needle that it can jab into the cells of our guts. Through it they inject a cocktail of molecules. One of the first of these molecules is a receptor, which inserts itself into the membrane of the intestinal cells. In other words, Escherichia coli makes our cells part human, part microbe. The receptor can take in more of the molecules Escherichia coli O157:H7 produces, which alter how the cell reads its genes. Over 2000 genes in the cell change their patterns of expression. Some genes make more proteins and others shut down.

As its genes are manipulated, the cell begins to behave oddly. The skeleton-like fibers that support the cell begin sliding over one another to create a new shape. A pedestal-shaped cup rises from the top of the cell, offering Escherichia coli O157:H7 a place to rest. The cell also begins to leak fluids, which rush past the microbes. Safely cradled on their pedestals, the microbes can absorb nutrients in the flow. They also release toxins that dislodge hemoglobin, the oxygen-ferrying molecule, from blood cells. O157:H7 needs iron to grow, and hemoglobin is an iron-rich molecule. As the host bleeds, the microbe pulls fragments of hemoglobin into its interior and pries the iron atoms free.

These changes cause blood diarrhea, but they are not the worst of Escherichia coli O157:H7's symptoms. Sometimes a few of the bacteria swell with toxins and burst.Their toxins enter our own cells, where they jam up the cellular factories that build proteins. Unable to make new proteins, the cells die and burst open. These toxins can slip into the blood vessels lining the intestines and soon spread to other organs. The kidneys are especially vulnerable to their attacks.

How can the same species be so gentle and so nasty? It has evolved. Escherichia coli has diversified into different strains. These strains adapted to different ecological niches. In some cases that adaptation made them harmless to us, allowing them to just graze on sugar cast off by other bacteria in our guts. In other cases, that adaptation made Escherichia coli a killer. Many different changes gave rise to this evolution. In some cases, genes spontaneously mutated and provided an extra reproductive edge to a microbe. In other cases, Escherichia acquired genes from other bacteria. In many of those cases, the genes came in bundles, delivered by viruses that pasted themselves into its genome and then became integrated into their host. You can find related versions of much of Escherichia coli O157:H7's equipment in other strains of E. coli and in other species of bacteria.

The evidence suggests that the ancestors of Escherichia coli O157:H7 and its disease-causing relatives branched off from the best known harmless strain, called K12, a few million years ago. But it acquired some of its most important equipment more recently than that. Here's a paper that presents some of the latest evidence about how O157:H7 and its relatives began acquiring new things such as toxins starting about 50,000 years ago. But it may not have been evolving into a better human pathogen. Instead, it may have been adapting to the animals that became our livestock about 10,000 years ago. Some research even suggests that O157:H7 helps sheep fight off cancer-causing viruses. For some reason scientists don't yet really understand, when it gets into us, its behavior causes disease instead of health. In other words, humans created the conditions--from the first herds to the latest giant ranches and slaughterhouses--that fostered the evolution of this scary beast. And in the past 30 years, changes in how we get our food have allowed O157:H7 to emerge as a serious threat to public health.

And this evolution has not stopped. New strains of E. coli that cause much the same disease as O157:H7 have emerged in recent years. They are aquiring viruses bearing genes for toxins and other important equipment for making us sick. Those viruses are floating around in our sewers in vast numbers, with about one percent carrying various version of the toxin genes.

So I for one will be laying off the spinach for the next few days, and spending some more time getting to know these strange creatures and how they came to be.

Update: Naturally, Tara Smith has more. And Mike too.

Update 9/18 1:30 pm: Why antibiotics are the last thing you want to take if you get sick with this bug.