It’s the open ocean. A baby fish, less than a centimetre long, floats through the water, completely oblivious of the danger it is in. It’s caught in a current, but one so smooth that the fish cannot detect it. Its only clue to what’s happening comes too late, as it’s suddenly sucked into a ring of tentacles and swallowed by one of the ocean’s stealthiest predators – the sea walnut. The sea walnut is a simple transparent blob, just a few inches long. It looks like a jellyfish but in fact, it belongs to a different but related group called the comb jellies, or ctenophores. It’s not exactly a fearsome predator. It cannot see and it can only sense the movement of prey just slightly beyond its body. It has no obvious weapons and it’s not capable of great speed. As a result, it cannot chase its prey. Instead, it uses beating hairs called cilia to create imperceptible water currents, which bring its prey straight into its mouth. Its weapons are surprise and a ruthless efficiency. Despite its simplicity, the sea walnut’s ninja-like stealth makes it immensely successful. For its size, the animal can capture prey at the same rate as fish, and that’s just when it stays still. If it moves, it can double what it consumes. This ability makes the sea walnut a major player in the oceans. It also makes it a notorious invader. In 1980s, sea walnuts were accidentally introduced into the Black Sea in the ballast of ships. Since then, the animals have made their way into the Caspian, Mediterranean and North Seas. Where it turns up, it eats fish larvae and plankton, causing local food webs to collapse. In the Black Sea, the anchovy, an economically important species, had gone into decline and dolphins have started to vanish. In the Caspian Sea, the native seal populations have fallen too. Sean Colin from Roger Williams University thinks that the secret to the sea walnut’s success lies in its effective and unfussy hunting habits. Colin hand-picked sea walnuts from his local dock and placed them in water seeded with small particles. The particles were lit with a laser and filmed with a camera, to understand how the sea walnut warped the flow of water around it. Colin found that it creates a current that sucks everything in the surrounding water into its tentacle-ringed mouth. The current it creates flows smoothly at just 2 millimetres per second. Only when it passes over the animal’s mouth does it accelerate and warp, spiralling into a corkscrew motion that goes past the tentacles. The mouth closes, and virtually everything caught up in this feeding current is eaten. The sea walnut creates its own conveyor belt of food, a streaming buffet made up of a varied selection of dishes. To get away with this, the sea walnut needs stealth. Floating plankton won’t pose much of a challenge, but some morsels like copepods (small crustaceans) are active swimmers that can detect the movements of incoming predators. If they sense danger, it takes them just two milliseconds to swim away at tremendous speed. But Colin found that the water disturbance caused by the sea walnut’s current is far less than what the copepods can detect. Feeding currents aren’t unusual. Shellfish and other animals use them but they do so in a blunt way. Their currents are turbulent and chaotic, used to draw in small plankton that can’t swim away. It’s a brute force approach, and one that’s very different to the stealthy strategy of the sea walnut. 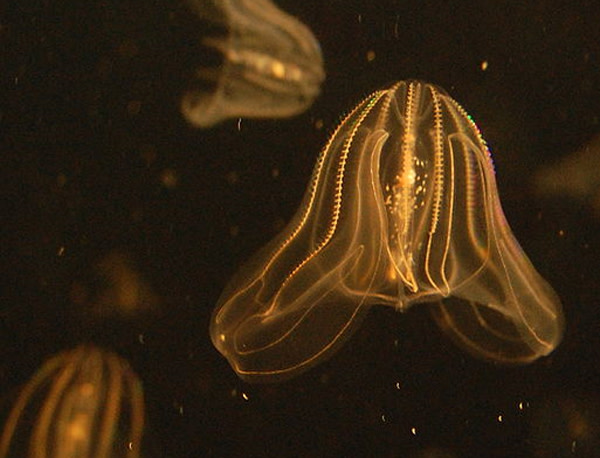