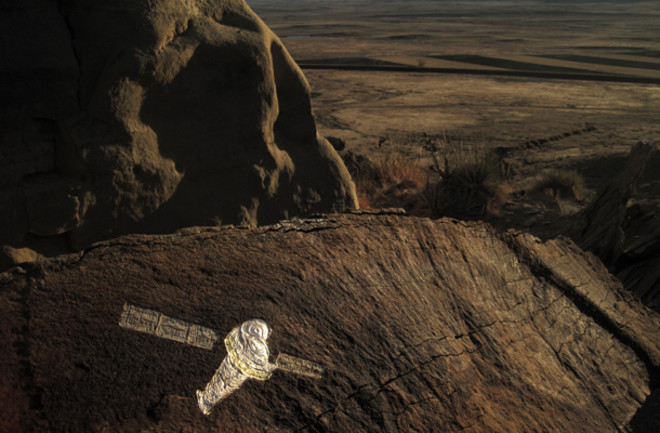 Kevin Sudeith is a contemporary artist with exceptional foresight. Sudeith is working in what is perhaps the most archival artistic medium available to humankind: stone carving. Petroglyphs, to be exact. Our achievements are awesome, notes Sudeith, but where is the proof? Rusted Model-T's and piles of corrupted hard drives might fail to convince. Even the architecture of our most celebrated cities is temporary, compared to solid rock dating from the Upper Cretaceous. Sudeith is doing what he can to address this problem of modernity by taking a year on the road to make engravings on rock faces and boulders across the country. The gold-leafed carving here is four miles west of Ingomar, Montana, in the Kanta Hills. The carving is in the hard cap rock on top of soft sandstone rim rocks. The stone on which the Chandra orbiting observatory is carved is in a shallow gully that opens into a bigger canyon and drops down to the fields below. It is readily accessible by a private road, which is open to public---which means there's sure to be more than a few puzzled hikers making snapshots next to the curious modern petroglyph. Sudeith: "My interest in the Chandra began with the naming contest, delay, and finally its deployment. Its images continue to be brilliant. Since the Chandra exists at the limit of our understanding of nature, perhaps carving a pictograph of it is similar to the carvings of the ancients---perhaps showing the game they hunted or symbolizing their beliefs."