The social web and Dunbar's number 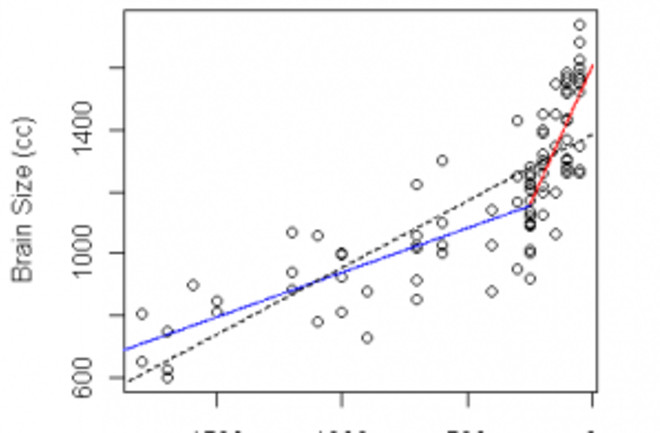 Encephalization of homininsCredit: Luke Jostins Over the past ~2 million years, up until ~100-200 thousand years before the present, the lineages leading up to modern humans have exhibited gradually increased cranial capacities. Why? The implication of the shift in anatomy is that our brains are getting large, ergo, our cranium needs to expand to accommodate the increased size. Larger brains are not a trivial matter. Human brains account for on the order of ~25% of our energetic expenditures. In other words they're expensive, so presumably they result in some major gain in fitness. There have been many reasons posited for this increase in brain size. Please note though that this gradual increase predates the cultural creativity of the Upper Paleolithic, and the emergence of behaviorally modern humans ~50,000 years before the present. In fact there has been a mild reversal of encephalization since the Last Glacial Maximum ~20-25 thousand years before the present. So this is not as simple a conundrum as you might think.

About a generation ago the anthropologist Robin Dunbar came up with an answer which has been broadly persuasive to many. Using comparative data from other primates, as well as human ethnographies, he posits that it was increased social complexity facilitated by language which entailed greater cognitive demands on our lineage. The basic intuition is obvious. Keeping track of interactions across a dyad, two individuals, is not particularly demanding. But a "three body" social problem is not just incrementally more complex. As band sizes scale up to a dozen individuals, and groups of bands include hundreds (clans?), individuals have to keep track of a maddeningly complex network of relations. Dunbar's surveys suggest that the real social network of humans (e.g., non-famous people whose personal lives you have some familiarity with) does not go much beyond 200 individuals. This is Dunbar's number. The neurological rationale for this ceiling is obvious: your brain can only keep so many people and connections between those people in long term memory. In theory the brain might become even larger, but it seems likely that the fact that the human female pelvis can widen only so much and maintain proper locomotion serves as a check on cranial capacity. Dunbar's number is then the outcome of a compromise between the gains to fitness of individuals of being in large social groups (and negotiating themselves well in those groups) and the anatomical limits of the female body. Grooming, Gossip, and the Evolution of Language, the book outlining the thesis in long form came out over 15 years ago. But it is today that Robin Dunbar is very hot, and very topical, as far as scholars go. The reason is the rise of ubiquitous social networking technologies. A few years ago a friend of mine posited that perhaps with Facebook we may now have ways to move beyond Dunbar's number. I was skeptical. But then again, computers allow us to break out of our cognitive deficits in may domains, so it's not totally impossible (imagine doing an MCMC by hand!). But the results seem in, and it turns out that many people within Silicon Valley either view Dunbar's number as a genuine insurmountable ceiling, or, a challenge which is not trivially tractable. The details are outlined in a BusinessWeek piece, The Dunbar Number, From the Guru of Social Networks. Though the article reports on some scholars who disagree with Robin Dunbar's number in terms of its value or utility, I think it is clear that despite this scholarly debate, the reality that our social domains are constrained toward values of less than 1,000 individuals is a robust finding. This is important, because it suggests that there are numerical units of particular relevance when it comes to scaling large social organizations, including nations of hundreds of millions of individuals. These Dunbar number sized units are probably the civil society "platoons" alluded to by social philosophers of previous centuries. They are the bricks upon which society is built. But for me the more interesting question is the possibility of variation in social network size and topology by individual. If the expected value of the size of an individual's social network is 150, what's the variation? Presumably individuals with severe autism converge upon zero, as they can not form conventional relationships with other human beings. But what about individuals with very high functioning autism? And how about the other end? Are there those whose cognitive powers are allocated in such a way that they can push somewhat beyond Dunbar's number? Those more familiar with the literature in this area are free to enlighten me.... I'll leave you with a fascinating paragraph from the piece:

...Dunbar actually describes a scale of numbers, delimiting ever-widening circles of connection. The innermost is a group of three to five, our very closest friends. Then there is a circle of 12 to 15, those whose death would be devastating to us. (This is also, Dunbar points out, the size of a jury.) Then comes 50, “the typical overnight camp size among traditional hunter-gatherers like the Australian Aboriginals or the San Bushmen of southern Africa,” Dunbar writes in his book How Many Friends Does One Person Need? Beyond 150 there are further rings: Fifteen hundred, for example, is the average tribe size in hunter-gatherer societies, the number of people who speak the same language or dialect. These numbers, which Dunbar has teased out of surveys and ethnographies, grow by a factor of roughly three. Why, he isn’t sure.