The Rusty Patched Bumble Bee Is Disappearing in the US 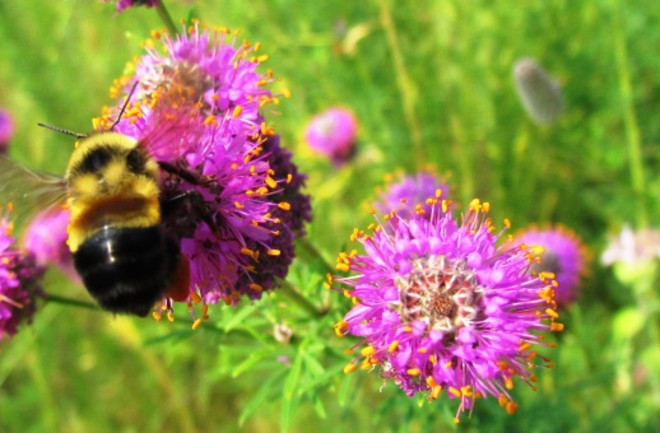 A rusty patched bumble bee. (Credit: Christy Stewart) For the first time, a species of bumble bee has been placed on the endangered species list in the United States. In fact, it's the first bee of any kind in the contiguous 48 states to land on the list. The rusty patched bumble bee, Bombus affinis, was once prevalent in 28 states in the Midwest, south and north-eastern U.S., but its numbers have been declining since at the least the 1990s, say researchers with the U.S. Fish and Wildlife Service. The agency announced Tuesday that B. affinis had been added to the list, a move that will go into effect February 10.

A 2013 request by the Xerces Society for Invertebrate Conservation prompted the USFWS to study the bumble bee's numbers, which ultimately led to their designation on the endangered species list. The researchers traced the history of the rusty patched bumble bee back to the 1940s, relying on observational reports from both researchers and citizen scientists, as well as published reports and museum collections. One factor in the bees' decline may have been the fact that they, and other bees, hadn't been well studied for decades. Researchers only caught on to their plight once it was well underway, says Tamara Smith, a USFWS biologist and an author of the study. "The rusty patched bumble bee declined rapidly during a time when bumble bee monitoring was largely limited to a few researchers," says Smith in an email to Discover. "After the fact, researchers are trying to piece together the most likely causes and to set up studies to help verify their hypotheses." The bees are now found in small patches of just 13 states, and populations have declined by 87 percent over the past few decades, say USFWS researchers in a report published in June 2016. As a result, in September the USFWS proposed listing the bumble bee on the endangered species list. Seven species of bee in Hawaii were placed on the list in October 2016, but this is the first time a bumble bee has appeared there. "Our top priority is to act quickly to prevent extinction of the rusty patched bumble bee," said USFWS Midwest Regional Director Tom Melius in a statement. "Listing the bee as endangered will help us mobilize partners and focus resources on finding ways right now to stop the decline." Like other bee species, B. affinis lives and dies with the seasons. Each spring, a queen establishes a new colony of workers from eggs fertilized the year before. As summer turns to fall, a new brood of queens is born, mates and enters hibernation. The older generation of bees dies off, and the cycle repeats itself. The rusty patched bumble bee population may be particularly vulnerable because of the bees' extended period of seasonal activity — they are active earlier in the spring and later into the fall than other species. This means that they rely on the presence of flowering plants from April to May — plants that are disappearing due to human activities. The bees habitat includes grasslands and prairies and they, along with other pollinators, play an important role in ensuring the health of the ecosystem. Pollinators help plants to reproduce and are an important resource for farmers, who rely on them to fertilize their crops. And, many of these pollinators live the same habitats and rely on the same resources as the rusty patched bumble bee.

"The plight of the rusty patched bumble bee is not an isolated occurrence, but a symptom of widespread decline of other bumble bees and many other insect pollinators," says Smith.

Other threats to the rusty patched bumble bee include fungal infections contracted from commercial bee populations, climate change and pesticides, such as neonicotinoids, which were recently found

to harm bee colonies. To help the bees, the USFWS recommends that citizens reduce their pesticide use and plant native flowers and plants that bloom from the spring through the fall.