I wrote an article for this Sunday's New York Times Magazine about the grey zone between coma and consciousness. Stories like this one are always hard, because there are so many crucial dimensions to the subject and so little room to do justice to them all. For example, I couldn't even begin to explain how the research I describe in the article--using PET and MRI scans to measure the brain activity in people with traumatic brain injuries--is a beautiful reverse twist on some of the most famous research ever done on the brain: the nineteenth century doctor Pierre Paul Broca's discovery of a region of the brain dedicated to speech. In 1861 Broca (1824-1880) treated a man who had suffered a stroke that robbed him of his ability to say anything except the word "Tan." (He said it so much that he was nicknamed Tan.) Despite this devastating blow to his faculty of language, he could still understand the speech of other people. After Tan's death, Broca autopsied his brain to find exactly what part of the brain had been damaged. It turned out that the stroke had destroyed part of Tan's left frontal lobe. Broca looked at other patients with the same condition (known as aphasia), and found that they too suffered damage in the same area--what came to be known as "Broca's area." It's hard to convey just how important this discovery was. As I explain in my book Soul Made Flesh, the idea that different faculties were the responsibility of different parts of the brain was first proposed in 1664 by the English physician Thomas Willis. Willis did some crude experiments to show that this was true (destroying nerves and bits of brain in dogs and waiting to see if they died), but there was a lot of resistance to the idea well into the 1800s. If you took this idea too far, you'd wind up with a brain that carried out all of the operations of the mind in different regions, like the gears in a clock. This was a threat to the traditional concept of the rational soul. To divide the soul was to deny it. In the late 1700s Franz Gall put a new spin on Willis's ideas with a theory that came to be known as phrenology. Gall had some pretty wild ideas about how you could tell which faculties a given area of the brain was responsible for--such as studying the bumps on people's heads. But Gall was also an excellent anatomist, and Broca respected his ideas. And in 1861 Broca found the real evidence for the "modularity" of the mind that Gall had been searching for. Tan's stroke was like a natural experiment, shedding light on the precise function of Broca's area by knocking it out. A few years later, the German neurologist Karl Wernicke used the same approach to find a second region of the brain that played a different role in language. He studied a stroke victim who could talk freely, but made little sense, and couldn't understand what other people said. That area is now known as Wernicke's area. Last year Nicholas Schiff of Cornell Weill Medical School and his colleagues, whom I profile in my NYTM piece, offered a modern twist on Broca's work. As they reported in the journal Brain, they took PET scans of people in chronic vegetative states. That means that after some devastating brain injury or disease, these people stopped showing any of awareness--although they might undergo some disconcerting reflex actions, such as opening their eyes and closing them in a sleep-wake cycle, or even making noises or moving their limbs. One of the most astonishing cases Schiff's team studied was a woman who had been in a vegetative state for 25 years. Every few days she let out a curse. The scientists used PET to measure how much energy her brain was using, and where that energy was being used. It turned out that practically all her cerebral cortex--the outer layer of the brain that is required for complex human thought--was shut down cold. You see the same readings in the PET scan of a healthy person under anesthesia. But in a few small regions of her cortex, the neurons were burning energy at levels much closer to that of a conscious person. One of those areas was Broca's. Broca discovered what happened to the mind if one part of the brain was destroyed. You get a conscious man who cannot speak. Schiff discovered what happens if that one part is just about all that's left. You get an unconscious woman who utters words.

MindCould the Immune System Be Key to Alzheimer’s Disease? 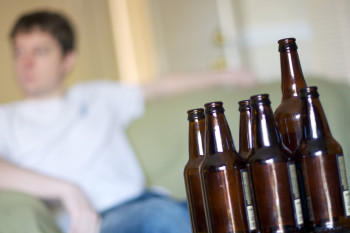 MindTrouble Sleeping in New Places? It's Probably Your Brain's Fault
Recommendations From Our Store