The Real Octowives of Jervis Bay 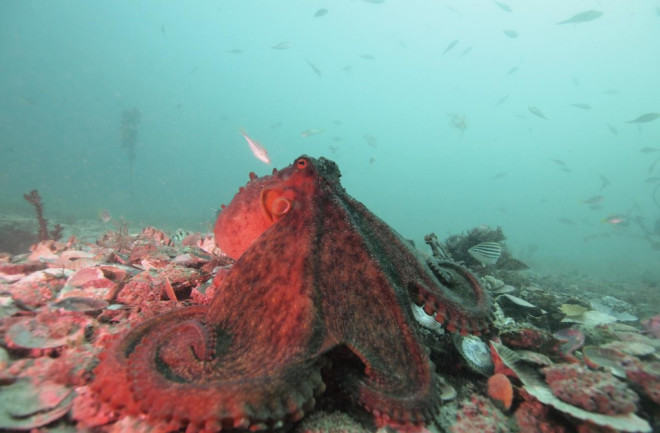 An angry octopus ready for a fight. Image credit: David Scheel Scientists have long thought that octopus are largely asocial creatures. But a new study finds that these eight-legged cephalopods are actually quite gregarious, and their lives are full of sex and conflict. There hasn't been this much drama under the sea since The Little Mermaid! The group of scientists, which hailed from Alaska, New York and Sydney, Australia, enlisted students to help them binge-watch over 52 hours of octopus TV recorded with GoPros in Jervis Bay, Australia. They took notes as gloomy octopuses flirted and fought. According to co-author Peter Godfrey-Smith, it wasn't easy to keep up with the drama. "Trying to keep track of who's who is very difficult. They can change color or shape in a second, and when one moves into view it is hard to tell whether they are a new animal — or one that you've been watching for ages," he told ABC Science. https://www.youtube.com/watch?v=5qNiPr8pYKU Over 7 hours of interaction footage were recorded and analyzed, amounting to 186 different interactions. Eleven percent of those were mating attempts, though it was unclear how often the attempts were successful. But like any hit reality TV show, the majority of the interactions were aggressive. Interactions often began with one octopus extending an arm towards another. Sometimes, an octopus made a big showy display, darkening its skin, raising its heads and extending its arms, perhaps attempting to look larger and more menacing ("It looked to me, for all the world, like Dracula approaching his prey," lead author David Scheel told NPR. "In my early notes I was calling this the Nosferatu display.") If the two octopuses were similar in darkness at the time of the interaction, they were significantly more likely to duke it out in a sixteen-armed grappling match. But if they differed in color — if one was a lot lighter than the other — then the lighter challenger usually retreated. The connection between body color and behavior suggests that these animals are signaling each other with their intent. Color manipulation for communication is well described in other species of cephalopods; now, the study authors say, it's time to reevaluate our beliefs about the social lives of octopuses. "The Young and the Boneless," anyone? "America's Next Top Mollusk"? "Hell's Kraken"? (leave your best cephalo-pun in the comments!) https://www.youtube.com/watch?v=EAwumH_XdBE Citation: Scheel et al., 2016. "Signal Use by Octopuses in Agonistic Interactions" Current Biology, DOI: 10.1016/j.cub.2015.12.033Special thanks to Jake Buehler and Kira Krend for pun-spiration