A long-forgotten collection of glass sea creatures resurfaces, to the delight — and alarm — of biologists. 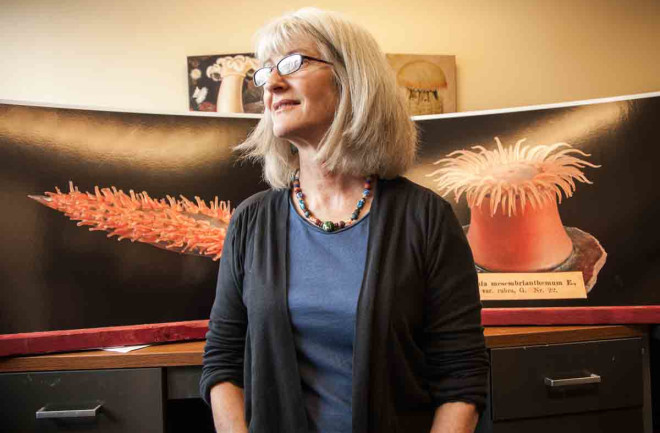 Drew Harvell of Cornell University rediscovered a treasure-trove of lifelike glass sea creatures. She now works to find as many of the specimens as possible in real life, a task made difficult by more than 100 years of human interference. | Jeffrey Delviscio

One afternoon in the late 1980s, a young marine biologist named Drew Harvell unearthed dozens of sea slugs in an upstate New York warehouse. She also found many species of jellyfish and octopus, some of which she’d never seen in the oceans. The creatures were packed in cardboard boxes, and while they looked real at first glance, they were all made of glass.

The collection of nearly 600 glass sea invertebrates belonged to Harvell’s new employer, Cornell University. They had traveled from Germany in 1885, purchased as teaching aids to expose students to ocean life they had scant opportunity to experience in person. But as technology made both underwater photography and fieldwork more accessible, the glass sculptures became obsolete. They spent decades in storage before Harvell rediscovered them. “I fell in love,” she says, recalling how awestruck she’d been by their uncanny resemblance to actual slugs and jellies. “I was stunned to see what to me were old friends.”

Harvell decided to have the glass conserved, hiring expert glassmakers to wipe away a century of accumulated dust and to repair fractures with removable glue. She also began photographing living counterparts whenever she did a research dive, excited to show off the models’ verisimilitude. But the more she looked, the more she realized how hard some creatures were to find.

“I got to thinking that in some ways, this collection was a time capsule,” she says. Representing biodiversity at the beginning of the Industrial Revolution, the obsolete glass menagerie has taken on new relevance under her watch: The models have become a benchmark for assessing the loss of sea life in the current Anthropocene epoch.

Blaschka From the Past

The men who made the glass creatures would have appreciated Harvell’s focus on biodiversity. Leopold Blaschka and son Rudolf combined consummate craftsmanship with a deep love of nature. Glass was the family business and had been for generations. Leopold grew up making glass eyes and costume jewelry, as well as glass orchids for the aristocracy. But an ocean voyage in 1854 expanded his ambitions. He returned to Europe and soon moved to Germany, ready to imitate the shimmering bodies of sea invertebrates.

Initially Leopold worked from illustrated books, fabricating colorful glass anemones and squid for exhibition in the Dresden Natural History Museum. When Rudolf entered the business in the 1870s, the Blaschkas expanded the collection to include the full gamut of spineless sea life — from brittle stars to sea cucumbers — which they sold to museums and universities worldwide. They also started ordering living specimens from marine laboratories throughout Europe.

“Their power of observation was very acute, and they were really well educated,” says Susan Rossi-Wilcox, former curator of Harvard University’s Blaschka glass flower collection (a later body of work for which the Blaschkas are now most renowned). “It’s very easy to think you’re copying something, but if you don’t have an understanding of the important aspects, the chances of getting it right are pretty low.” The Blaschkas got it right every time, and they did so with dexterity that confounds modern glassmakers.

“The technology they had to do this was a wooden bench with a bellows system,” explains Marvin Bolt, curator of science and technology at the Corning Museum of Glass in New York. From the delicacy of jellyfish bells to the fragility of their tentacles, the models depended on technical perfection for their educational value. “You get a real sense of the animals’ scale and ornamentation,” says Bolt. “Students could see similarities between species and therefore their evolutionary connections.”

However, the fine glass details were vulnerable to breakage, especially when handled by students. It wasn’t long before the fragile figures were lost to time, packed away in cardboard boxes. The Corning Museum of Glass has been instrumental in their restoration, working at Harvell’s behest, and a selection is currently on view in an exhibition that runs through the beginning of 2017. The museum is also screening a film by Harvell and underwater videographer David O. Brown, documenting her efforts to find living likenesses of the glass creatures anywhere from the North Atlantic to the Mediterranean to the coral reefs of Indonesia.

The search has been revealing, showing how dramatically biodiversity has diminished since the Blaschkas’ era. Their cephalopod collection — numerous octopus, squid and cuttlefish — is a good example: “Some of them turn up in the stomachs of whales and sharks, so we know they must be out there, but nobody has seen them for quite a while now,” Harvell says. “For the Blaschkas to have had access to them, they must have been much more common.”

Still, Harvell is frank about the challenges of drawing conclusions from the Blaschka collection. “The oceans are a very big place,” she observes, and truly comprehensive surveys require more resources. Harvell thinks the Blaschka models will help, and that their artistry can inspire greater interest in spineless saltwater species. “People are very vertebrate-centric,” she says.

The vitreous cuttlefish and sea slugs evoke an underwater world that few people encounter directly even today. Nearly a century and a half after their creation, these glass models are once again showing their educational worth.