Our chromosomes are like socks: you want to have a pair of them, nothing more and nothing less. We have 23 pairs of chromosomes per cell, and there are great costs to exceeding this ideal number. Having odd numbers of certain chromosomes leads to genetic disorders like Down syndrome, while babies with three of every chromosome – triploids – tend to be lost to miscarriage or die within months. But having extra chromosomes isn’t always bad. In our liver, it’s positively encouraged. Cells with extra chromosomes are known as polyploids and they’re a common feature in all mammalian livers. Some have four copies of each chromosome; others have eight, even sixteen. Now, Andrew Duncan from the Oregon Health and Science University has found that liver cells can cycle through chromosome numbers with surprising ease, frequently increasing and reducing their counts. This unique ability could explain why the liver is so good at re-growing itself in the face of injury (the entire organ can regenerate from just a quarter of its mass). By producing a mix of cells with different sets of chromosomes, the liver is a hotbed for genetic diversity. When it’s injured, the most resistant cells from the pool can start things anew. Duncan injected mice with special liver cells that each carried eight full sets of chromosomes. These “octoploid” cells were engineered to produce a bright glow in the presence of certain chemicals. By tracking their shimmers, Duncan could spot the transplanted cells and any of their daughters. He found that that these glows came from cells with eight sets of chromosomes, but also those with four or even two. Some of the daughters of the transplanted cells had clearly jettisoned some of their parents’ chromosomes. To work out how, Duncan looked at how these cells divided under the microscope. As I’ve written about before, for such an ordinary process, cell division is an astonishingly beautiful dance:

It begins with cells creating the right number of partners, by duplicating all of their chromosomes. At first, the dancers haphazardly mingle with each other but as things get underway, they separate and line up in a neat row. Then, dramatically, they shimmy across to opposite ends of the room, following long spindles of protein. Once the partners split up, the cell pinches down its middle and separates them forevermore. Without this courtly dance, you would never have been anything more than a fertilised egg. Life simply wouldn’t work.

For one cell to split into two, it needs two sets of spindles, coming from two separate poles. But when Duncan looked at liver cells, he found that they would often have three or four sets of spindles. Some cells even had eight. It’s cellular chaos but somehow it works – a cell with many sets of chromosomes produces daughters with fewer sets. Duncan calculated that around 4 in every 100 divisions produced at least three or four daughter cells, each with different numbers of chromosomes. This degree of chromosomal instability has been linked to cancer in the past. The fact that it’s so pervasive in the liver is very surprising, especially since liver cancer is very rare in mice. For now, it’s a mystery, but one that Duncan is keen to solve. His next step is to try and find other similar cases in both mice and humans, across a variety of different tissues. 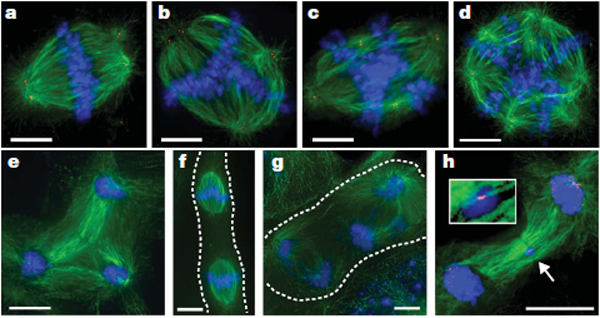 Some of the cellular chaos in the liver. In a, cell division proceeds normally with two sets of spindles coming from two poles. In b, c, and d, there are too many poles. In e, three sets of spindles are about to produce three daughter cells. In f and g, two lots of division are going on in the same cell. In h, some chromosomes are lagging behind while the rest have almost finished separating.