A geologist treks to an active volcano to see what happens when opposites collide. 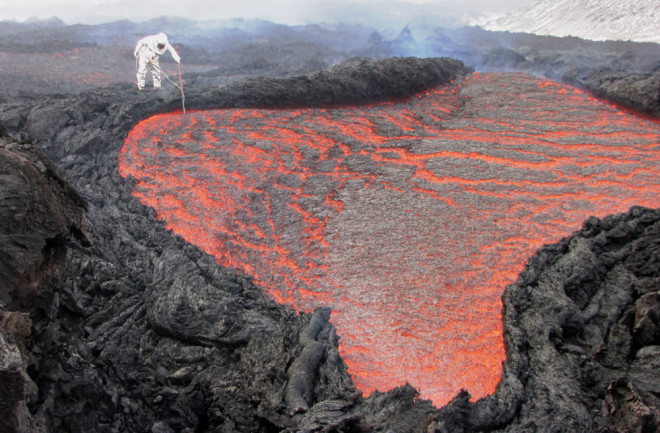 Lava melts ice, right? It seems like a no-brainer, but it’s not quite that simple.

Benjamin Edwards, a geologist at Dickinson College in Carlisle, Penn., has explored scores of volcanoes in British Columbia, Iceland, South America and Russia. His specialty is studying what happens when flowing lava meets ice and snow.

Figuring out this interaction helps Edwards and his team understand a volcano’s climate history and better estimate flooding in nearby communities when snowcapped volcanoes erupt.

In 2013, Edwards journeyed to Tolbachik, a complex of active volcanoes on eastern Russia’s remote Kamchatka Peninsula. When he and his team arrived at one of the volcanoes via helicopter, the peak was drooling lava across the rugged, snowy terrain. In his silver fire suit, Edwards stood next to a lava bank, took its temperature — roughly 2,000 degrees Fahrenheit — and got to work studying how the flowing molten mass and snow do their dance.

There was this place where the lava was barely sticking out of the snow; it’s inside the snow, basically. It would push into the snow, melt it and keep pushing through. In some places, it actually pushed hard enough that the snow started to break into blocks and pop up above — almost like cartoons where a mole starts to dig a tunnel into the ground, and you see all this dirt come up.

We could tell the lava was doing something because there was a little bit of steam, and you could see the flow moving, but we had no idea what was going on under the snow.

So we needed to dig a hole. We went out, maybe 20 or 30 feet in front of the lava, and started digging a pit. And we tried to gauge which direction the lava was going, so we could dig the pit in front of the flow and it would come into our little trap. We dug as fast as we could so we could start making measurements as meltwater started seeping through the snow and into the pit. We were so busy digging, we didn’t consider we were only 4 feet from about 2,000-degree lava, with nothing in between but snow.

Once we got it done, the lava started oozing in. That was pretty incredible to see. As far as I know, we’re the only people who have ever seen that on this planet.