Some people are surprised to find out that domestic cats are a major threat to bird populations -- in the United States alone, cats kill over one BILLION birds each year. Fortunately, these Australian scientists are on the case. They tested a commercial product (made in the USA) called "Birdsbesafe®", a collar cover that bears a strong resemblance to a hair scrunchie. The idea is that the colorful collar makes it easier for birds and other prey to see the cat coming, reducing Fluffy's hunting success. And it works! An almost 50% reduction in the number of birds and lizards are caught by the scrunchie-wearing cats. One caveat for anyone with a fondness for mice: Birdsbesafe only protects animals with good color vision, like birds and lizards. Sorry, Mickey--you're on your own. 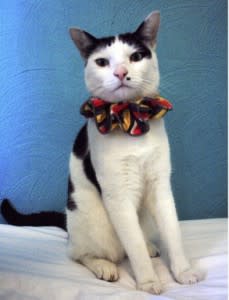 Assessing the effectiveness of the Birdsbesafe® anti-predation collar cover in reducing predation on wildlife by pet cats in Western Australia "Many pet cats hunt and, irrespective of whether or not this threatens wildlife populations, distressed owners may wish to curtail hunting while allowing their pets to roam. Therefore we evaluated the effectiveness of three patterned designs (simple descriptions being rainbow, red and yellow) of the anti-predation collar cover, the Birdsbesafe® (BBS), in reducing prey captures by 114 pet cats over 2 years in a suburban Australian context. The BBS offers a colourful indicator of a cat's presence and should therefore alert prey with good colour vision (birds and herpetofauna), but not most mammals with limited colour vision. We also interviewed the 82 owners of cats in the study about their experience using the BBS and their assessment of the behavioural responses of their cats. In the first year of the study, which focused on the effectiveness of different BBS colours, captures of prey with good colour vision were reduced by 54% (95% CL 43–64%) when cats were wearing a BBS of any colour, with the rainbow and red BBS more effective than the yellow when birds were prey. Captures of mammals were not reduced significantly. The second year assessed the rainbow BBS alone, and those data combined with rainbow data in the first year found a significant reduction of 47% (95% CL 43–57%) in capture of prey with good colour vision, with no effect of differences across years. We found no evidence that cats maintained a lower predation rate once the BBS was removed. Seventy-nine per cent of owners reported that their cats had no problems with the BBS and another 17% reported that their cats adjusted within 2 days. Fourteen owners reported that their cats spent more time at home and ate more while wearing the BBS. Two owners reported their cats stayed away from home more while wearing it. Sixty-four per cent of owners using the red collar, 48% using rainbow and 46% using yellow believed that it worked. Overall, 77% of owners planned to continue using the BBS after the study had finished. The BBS is an option for owners wishing to reduce captures of birds and herpetofauna by free-ranging cats, especially where mammalian prey are introduced pests. To date, the BBS is the only predation deterrent that reduces significantly the number of herpetofauna brought home. It is unsuitable where endangered mammalian prey or large invertebrates are vulnerable to predation by pet cats." Related content: Scientists make “species-appropriate” music just for cats. Listen here!Ever wonder what your outdoor cat does all day long? Behold the KittyCam!Friday flashback: Introducing…the automatic LOLcat detector!