The Hive Mind Reader: My Smithsonian profile of Thomas Seeley 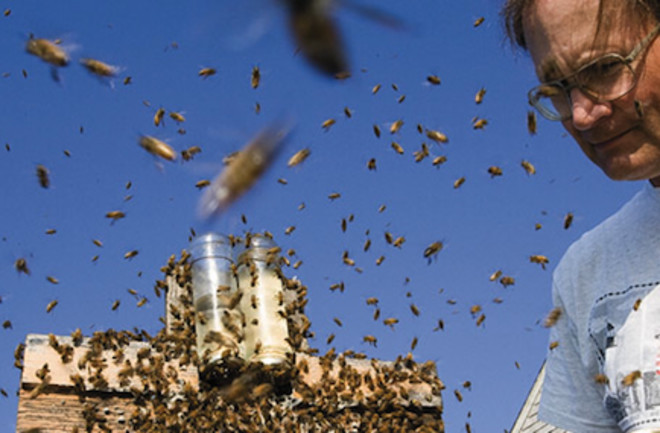 In the March issue of Smithsonian, I profile Thomas Seeley, a Cornell scientist who has spent forty years pondering how honeybees make up their collective minds. His discoveries reveal some striking parallels between honeybee swarms and our own brains. There are even some lessons we can learn from bees about how to run a democracy. Reporting this story involved some of the weirdest experiences I've ever had, as the introduction to my piece illustrates:

On the front porch of an old Coast Guard station on Appledore Island, seven miles off the southern coast of Maine, Thomas Seeley and I sat next to 6,000 quietly buzzing bees. Seeley wore a giant pair of silver headphones over a beige baseball cap, a wild fringe of hair blowing out the back; next to him was a video camera mounted on a tripod. In his right hand, Seeley held a branch with a lapel microphone taped to the end. He was recording the honeybee swarm huddling inches away on a board nailed to the top of a post.

Seeley, a biologist from Cornell University, had cut a notch out of the center of the board and inserted a tiny screened box called a queen cage. It housed a single honeybee queen, along with a few attendants. Her royal scent acted like a magnet on the swarm.

If I had come across this swarm spread across my back door, I would have panicked. But here, sitting next to Seeley, I felt a strange calm. The insects thrummed with their own business. They flew past our faces. They got caught in our hair, pulled themselves free and kept flying. They didn’t even mind when Seeley gently swept away the top layer of bees to inspect the ones underneath. He softly recited a poem by William Butler Yeats:

I will arise and go now, and go to Innisfree, And a small cabin build there, of clay and wattles made: Nine bean-rows will I have there, a hive for the honey-bee, And live alone in the bee-loud glade.

A walkie-talkie on the porch rail chirped.

“Pink bee headed your way,” said Kirk Visscher, an entomologist at the University of California, Riverside. Seeley, his gaze fixed on the swarm, found the walkie-talkie with his left hand and brought it to his mouth.

“We wait with bated breath,” he said.

“Breath. Bated. Over.” Seeley set the walkie-talkie back on the rail without taking his eyes off the bees.

A few minutes later, a honeybee scout flew onto the porch and alighted on the swarm. She (all scouts are female) wore a pink dot on her back.

“Ah, here she is. Pink has landed,” Seeley said.

Pink was exploring the island in search of a place where the honeybees could build a new hive. In the spring, if a honeybee colony has grown large enough, swarms of thousands of bees with a new queen will split off to look for a new nest. It takes a swarm anywhere from a few hours to a few days to inspect its surroundings before it finally flies to its newly chosen home. When Pink had left Seeley’s swarm earlier in the morning, she was not yet pink. Then she flew to a rocky cove on the northeast side of the island, where she discovered a wooden box and went inside. Visscher was sitting in front of it under a beach umbrella, with a paintbrush hanging from his lips. When the bee emerged from the box, Visscher flicked his wrist and caught her in a net the size of a ping-pong paddle. He laid the net on his thigh and dabbed a dot of pink paint on her back. With another flick, he let her go.

Visscher is famous in honeybee circles for his technique. Seeley calls it alien abduction for bees.

As the day passed, more scouts returned to the porch. Some were marked with pink dots. Others were blue, painted by Thomas Schlegel of the University of Bristol at a second box nearby. Some of the returning scouts started to dance. They climbed up toward the top of the swarm and wheeled around, waggling their rears. The angle at which they waggled and the time they spent dancing told the fellow bees where to find the two boxes. Some of the scouts that witnessed the dance flew away to investigate for themselves.

Then a blue bee did something strange. It began to make a tiny beeping sound, over and over again, and started head-butting pink bees. Seeley had first heard such beeps in the summer of 2009. He didn’t know why it was happening, or which bee was beeping. “All I knew was that it existed,” he said. Seeley and his colleagues have since discovered that the beeps come from the head-butting scouts. Now Seeley moved his microphone in close to them, calling out each time the bee beeped. It sounded like a mantra: “Blue...blue...blue...blue...blue.”

When you consider a swarm one bee at a time this way, it starts to look like a heap of chaos. Each insect wanders around, using its tiny brain to perceive nothing more than its immediate surroundings. Yet, somehow, thousands of honeybees can pool their knowledge and make a collective decision about where they will make a new home, even if that home may be miles away.

The decision-making power of honeybees is a prime example of what scientists call swarm intelligence. Clouds of locusts, schools of fish, flocks of birds and colonies of termites display it as well. And in the field of swarm intelligence, Seeley is a towering figure. For 40 years he has come up with experiments that have allowed him to decipher the rules honeybees use for their collective decision-making. “No one has reached the level of experimentation and ingenuity of Tom Seeley,” says Edward O. Wilson of Harvard University.

You can read the rest here

. And if you crave more, take a look at Seeley's newest book, Honeybee Democracy

. It's an exceptional combination of memoir, entomology, and political philosophy.