I've got a new story up in New Scientist about the discovery of a gene called p53 - the so-called guardian of the genome - in one of the simplest group of animals, the Placozoa.

A vital gene that defends us against cancer has been found in one of the simplest of animals - a flat, amoeba-like creature called a placozoan. The discovery shows that p53, sometimes described as the "guardian of the genome", has been around for over 1 billion years 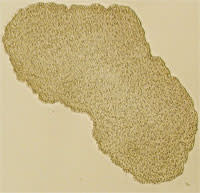 Placozoans are so simple that it's hard to conceive of them as animals at all. They have no tissues or organs, no front or back, no left or right. They look for all the world like amoebas, with flattened bodies that are just a few cells thick. There's only one confirmed species, Trichoplax adherens, although the existence of a second is disputed. Depending on who you believe, the Placozoans are either at the very base of the animal evolutionary tree, or a very early off-shoot from it.

And yet, new research shows that placozoans have a version of a vital gene called p53 (or TP53) that guards our genomes against the type of DNA damage that can ultimately lead to cancer. It even has a version of one of p53's accomplices - a gene called Mdm2 that keeps it in check. The new study shows that both partners have been around for over a billion years, since the very dawn of the animal kingdom. Whether they were protecting DNA from damage back then is unclear, and understanding their role in modern placazoans could tell us about the evolution of these vital genes.

There are many other cool aspects to this story, and I'd encourage you to click over to New Scientist for more. For a start, the discovery comes from Sir David Lane, who discovered p53 around 30 years ago. The discovery also highlight how important it is to sequence the genomes of more unusual animals from different parts of the kingdom - none of this would have been possible if the genome of T.adherens hadn't been recently published.

One of the aspects of the story that I only touched on briefly in the NS piece concerns the lack of Mdm2 in animals like flies and worms that are more closely related to humans. These model animals also have versions of p53 that are more distantly relatd to our own than that of the supposedly primitive placazoans. Lane suspects that these proteins have taken a complicated evolutionary path. In the last common ancestor of flies and worms, the p53 gene was duplicated and the original was subsequently lost. The duplicate evolved free from the control of Mdm2, which was itself lost. This explains why the current gene in flies and worms is so different - it's a pirated version gone rogue.