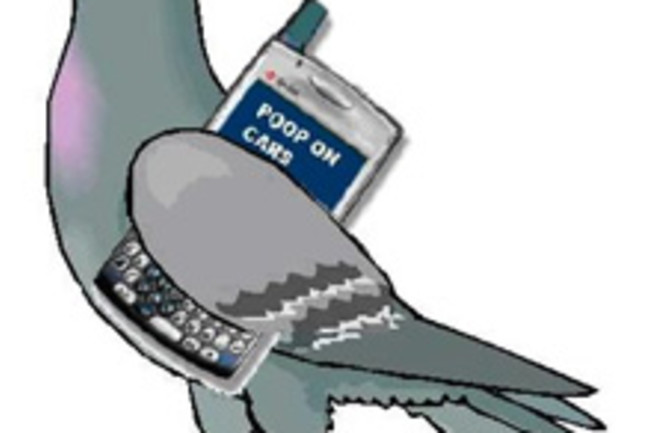 In a move of criminal genius, prisoners in Brazil got carrier pigeons to do some of their dirty work for them. Or got them to try, at least—until they got caught. Last week, guards at a Sao Paulo prison noticed that a pigeon on a nearby electric wire had a small bag tied to one of its legs. They lured it down with some food, and found a small cell phone inside the bag. The next day, another pigeon was found with a similar bag—this time, with the phone's charger. Apparently, prisoners had bred and raised the pigeons on prison grounds, then smuggled them out to be equipped with the phone parts. When released again, they flew back to the prison, since pigeons instinctively always fly home. But investigators don't know yet which prisoners were involved in the breeding, nor do they know the intended recipient of the phone. They're hoping the phone company will have such information, but if a third pigeon shows up with a Bluetooth headset, they might save a lot of detective work if they just let the pigeon finish the job. Related Content: Discoblog: Empty Nesters: Pigeons on the Pill See Their Egg-Laying Thwarted