The Evolutionary History Of A Malaria Parasite 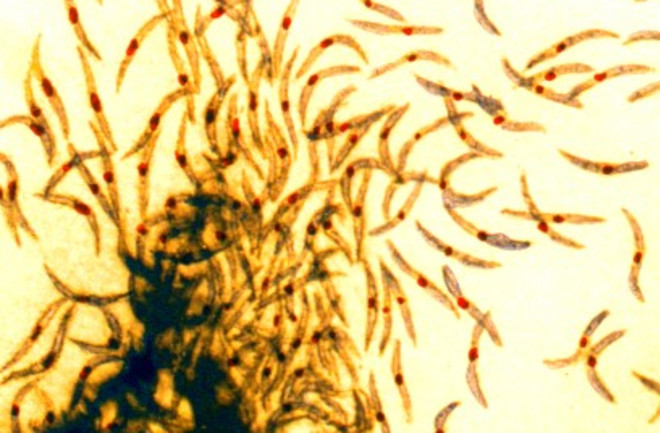 Did malaria hitch a ride with ancient humans out of Africa? People typically develop the disease after sporozoites, the infectious form of a Plasmodium parasite, are injected into the bloodstream by mosquitoes. (Credit: NIAID/Wikimedia Commons) Millions of people annually contract malaria after infection by nasty little parasites belonging to the genus Plasmodium. Thanks to new genomic insights, researchers believe they've uncovered a key chunk of the disease's evolutionary back story — and a potential new path to fight it. There are more than 100 species in the rogues' gallery that is Plasmodium, but only four typically lead to malaria in humans: P. falciparum, found mostly in Africa and causing a particularly severe and deadly form of the disease; P. ovale, found primarily in West Africa; P. malariae, a worldwide scourge that can cause chronic, lifelong debilitation; and P. vivax, the most common of the four. (A fifth species, P. knowlesi, pops up in macaques in Southeast Asia and has caused disease in humans, particularly in Malaysia.) A few words about P. vivax: Among humans with malaria, it's found mostly in Southeast Asia and Central and South America. It shows up in Africa, but on a much smaller scale because many Africans, particularly south of the Sahara, have natural resistance to it thanks to what's known as the Duffy-negative mutation. Researchers had long assumed, because of its modern distribution, that P. vivax evolved in Asia, possibly jumping from macaques to humans like P. knowlesi occasionally does today. Then some fragmentary, inconclusive genetic data turned up evidence of a plasmodium parasite extremely similar to P. vivax in several wild African apes, including chimpanzees, bonobos and gorillas, hinting that it might have had an African origin. When I say fragmentary and inconclusive, I mean it...the previous research relied on bits of non-nuclear, mitochondrial DNA from the parasite that were found by poking through primate poop. Today, researchers announced that they got their hands on much better samples of the parasite's DNA from six chimps and a gorilla. The genetic material came from blood drawn while the animals received veterinary care either in the wild or at sanctuaries and rescue facilities in Cameroon, Gabon and Côte d’Ivoire. As a result, the team was able to obtain two nearly complete genomes and several high-quality partial genomes of the pesky plasmodium. These Are The Pros And Cons Of Hitchhiking Based on similarities between the new samples and those of the parasite taken from infected humans, the researchers believe P. vivax did indeed evolve in Africa, infecting ancient apes of several species, including our own. The parasite samples from humans and non-humans weren't quite the same, however. P. vivax from infected non-humans was ten times genetically more diverse than the plasmodium genomes sampled from infected humans. The strong similarities but lack of diversity led researchers to conclude that the P. vivax that infects humans today likely emerged out of the lineage still found in gorillas and chimps. They suspect humans infected with the parasites traveled out of Africa, bringing their unwanted hitchhikers with them. The small number of P. vivax parasites that left the continent caused what researchers call a genetic bottleneck and led to the loss of diversity seen in today's human-infecting P. vivax. Although the Duffy-negative mutation evolved to be common among sub-Saharan Africans, affording protection from malaria via P. vivax infection, human populations beyond the continent were not so fortunate, which is why, today, we see so many P. vivax cases in Asia and parts of the Americas. In addition to being more genetically diverse, the P. vivax-like parasite found in the chimps and gorilla (which the researchers call ape P. vivax) is not species-specific. The authors behind today's study report that the parasite found in the wild apes has infected at least one human, a European traveler who did not have the Duffy-negative mutation. That means apes, chimps, and bonobos are reservoirs of a parasite that could jump from the animals to humans who lack natural resistance. Don't be alarmed. The flipside of the discovery is promising. As parasites evolve to be species-specific, various genes turn off or on or mutate into something new, all to better settle in with their dedicated host. Having the new ape P. vivax sequences to compare with human P. vivax samples allows future research into the often subtle genetic changes that made the parasite so well adapted to infecting humans. Understanding the genetic shifts that resulted in human P. vivax may lead to new ways to prevent infection. The study appears today in PNAS.