The Egg of the Dead

Historian Dionisius Agius of the University of Leeds in England recently reconstructed and translated a meticulously inscribed egg (below) from a Muslim graveyard in Quseir, a 15th-century Egyptian outpost 100 miles east of Luxor. The shell is covered with a verse from the Qur'an celebrating death, forgiveness, and eternal life, suggesting the egg was in essence a tombstone. At the time, Quseir was a hub of trade between Egypt, India, and the Mediterranean, and a stopping point for Christians making pilgrimages to Jerusalem as well as for Muslims journeying to Mecca. During these exchanges, the people of Quseir probably spread the ancient craft of ostrich-egg decoration and adapted its symbolism. Agius says: "Writing on an egg may be attributed magical significance; there is an old belief that the egg gives miraculous power to the dead and can call them back to life." 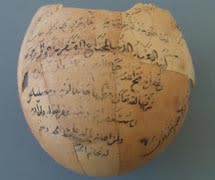