The Earth *Really* Moved: Chilean Quake Shifted a City 10 Feet to the West 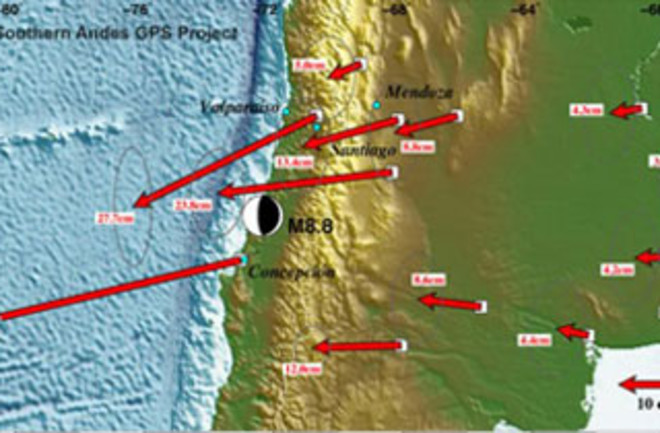 The magnitude 8.8 earthquake that rocked Chile on February 27th didn't just move the Earth's axis, thereby shortening the day by 1.26 microseconds, but it also caused entire cities to shift their geographical location. Studying precise GPS images of the area struck by the quake, a team led by earth scientist Mike Bevis discovered that the Chilean city of Concepción had moved 10 feet to the west. The epicenter of the quake was 71 miles northeast of Concepción, which is Chile's second largest city. The effect was widespread: The capital city, Santiago, was wrenched 11 inches west-southwest, while Beunos Aires, located nearly 800 miles from the epicenter, jumped an inch to the west. The earthquake was the fifth largest ever to be recorded by seismographs and even caused far-off areas like Fortaleza, Brazil and the Falkland Islands to change location slightly. The changes were detected by teams from

. The area where the quake hit

is of particular interest to geoscientists because it is an active subduction zone, where an oceanic plate is colliding with a continental plate and being pushed into the Earth’s molten mantle below [Wired].

The world's five largest quakes since 1900, including the largest quake ever recorded (a Chilean quake measuring 9.5), have all occurred in subduction zones. Earth scientist Ben Brooks of the University of Hawaii declared that this

"earthquake will arguably become one of the, if not the most important, great earthquakes yet studied....We now have modern, precise instruments to evaluate this event" [CNN].

Related Content: Discoblog: Chile Quake Shifted Earth’s Axis, Shortened the Length of a Day 80beats: Why Chile’s Massive Earthquake Could Have Been Much Worse 80beats: NASA Jet Studies Haiti’s Fault Lines For Signs of Further Trouble 80beats: Where in the World Will the Next Big Earthquake Strike? 80beats: Satellite Images Show the Extent of Haiti’s Devastation 80beats: Haiti Earthquake May Have Released 250 Years of Seismic Stress 80beats: Science Via Twitter: Post-Earthquake Tweets Can Provide Seismic DataImage: University of Hawaii